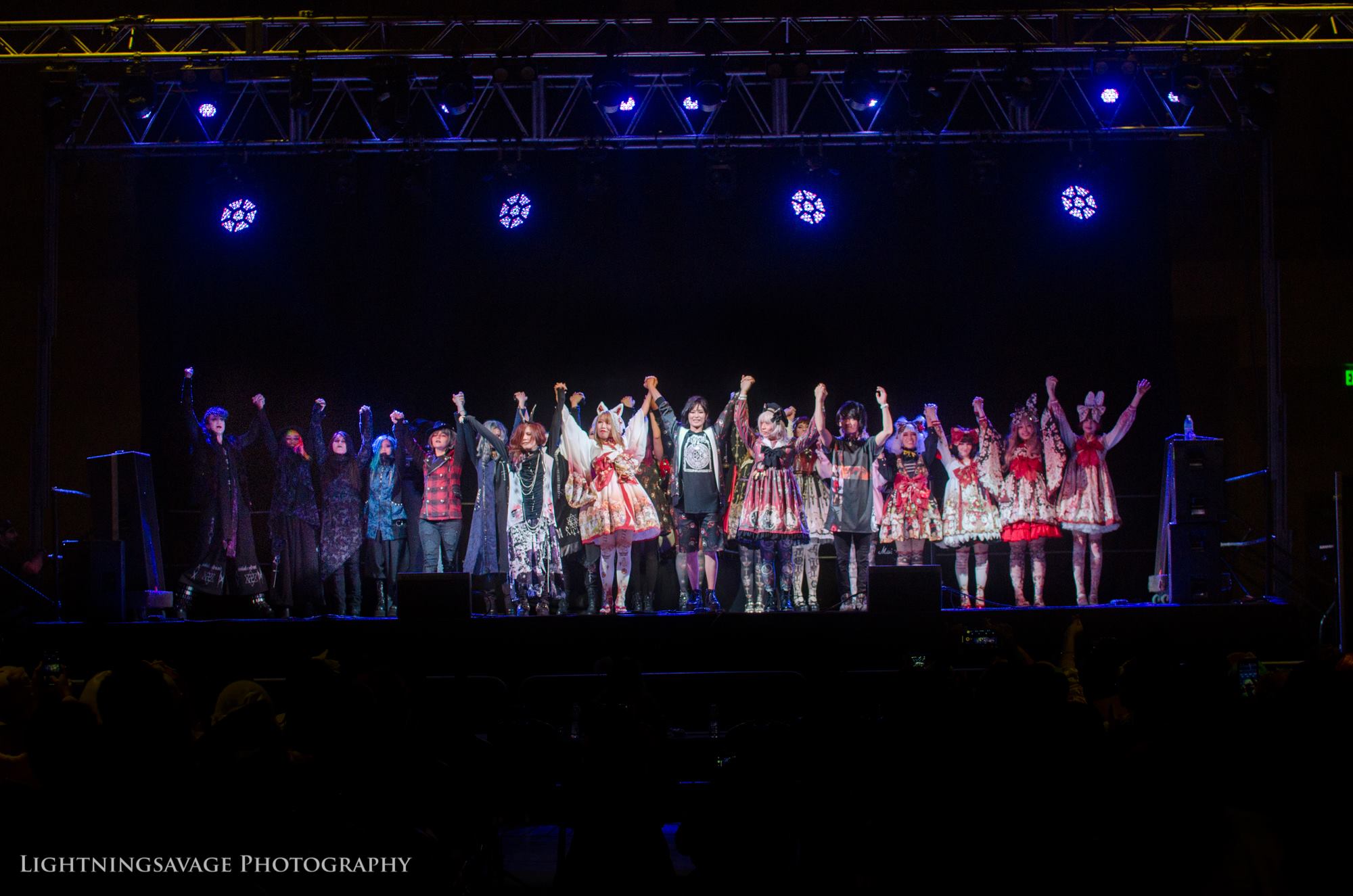 This year, I had the pleasure of being staff and staff photographer for the Japanese Fashion Track at Oni-Con in Galveston, TX, USA. Unlike years before, the convention took place in November, two weeks later than it had previously.

Once I started shooting at the con, I quickly found out that due to the teamwork of the staff and good planning in the fashion show and tea party specifically, this was my best photographic Oni-Con yet. I’ve published my coverage of other years, in 2017 on Wunderwelt Libre and in 2016 on Lolita Amino, but I think you’ll agree that the photo quality (specifically of the fashion show) took a huge leap this year, and it is a leap that I’m thrilled to provide.

I’ve grown a lot this year as a photographer and as a person, and it really shows in my work. 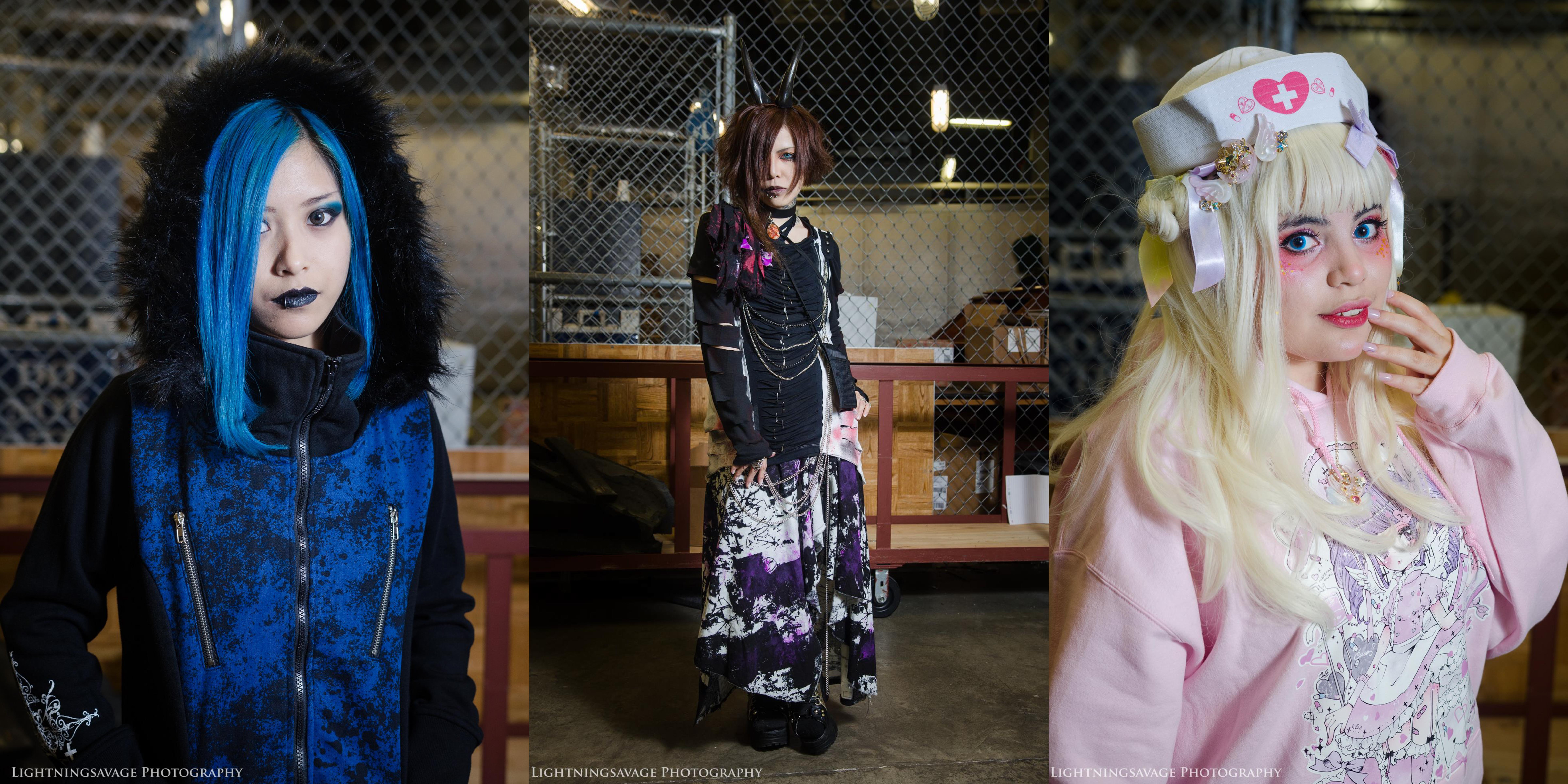 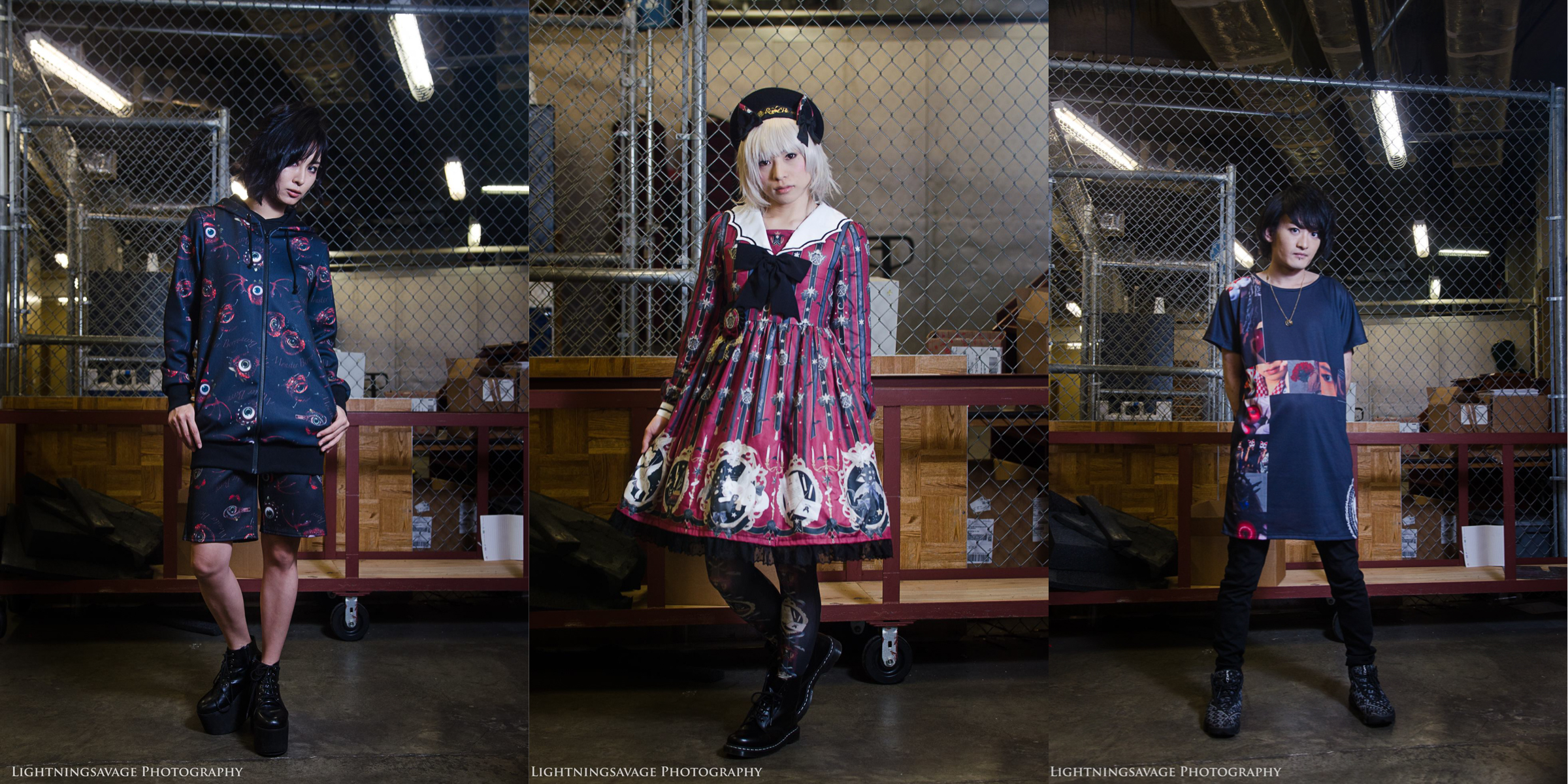 If you have been following my work in previous years, you know that I like to take individual portraits backstage before the models go up to walk. Because of the brands guesting this year, I didn’t want these photos to be the regular Lolita aesthetic. I wanted grungy and rough and raw and, well, punky—to match the feel of Bio Politics and SEX POT ReVeNGe. I envisioned a grungy setting, with a strong light source, high contrast, and shadows.

I was able to set up behind the panel rooms in the convention center employee zone. I immediately saw a grungy looking fence, indoors, with a bunch of random things inside and outside the fence for visual interest. 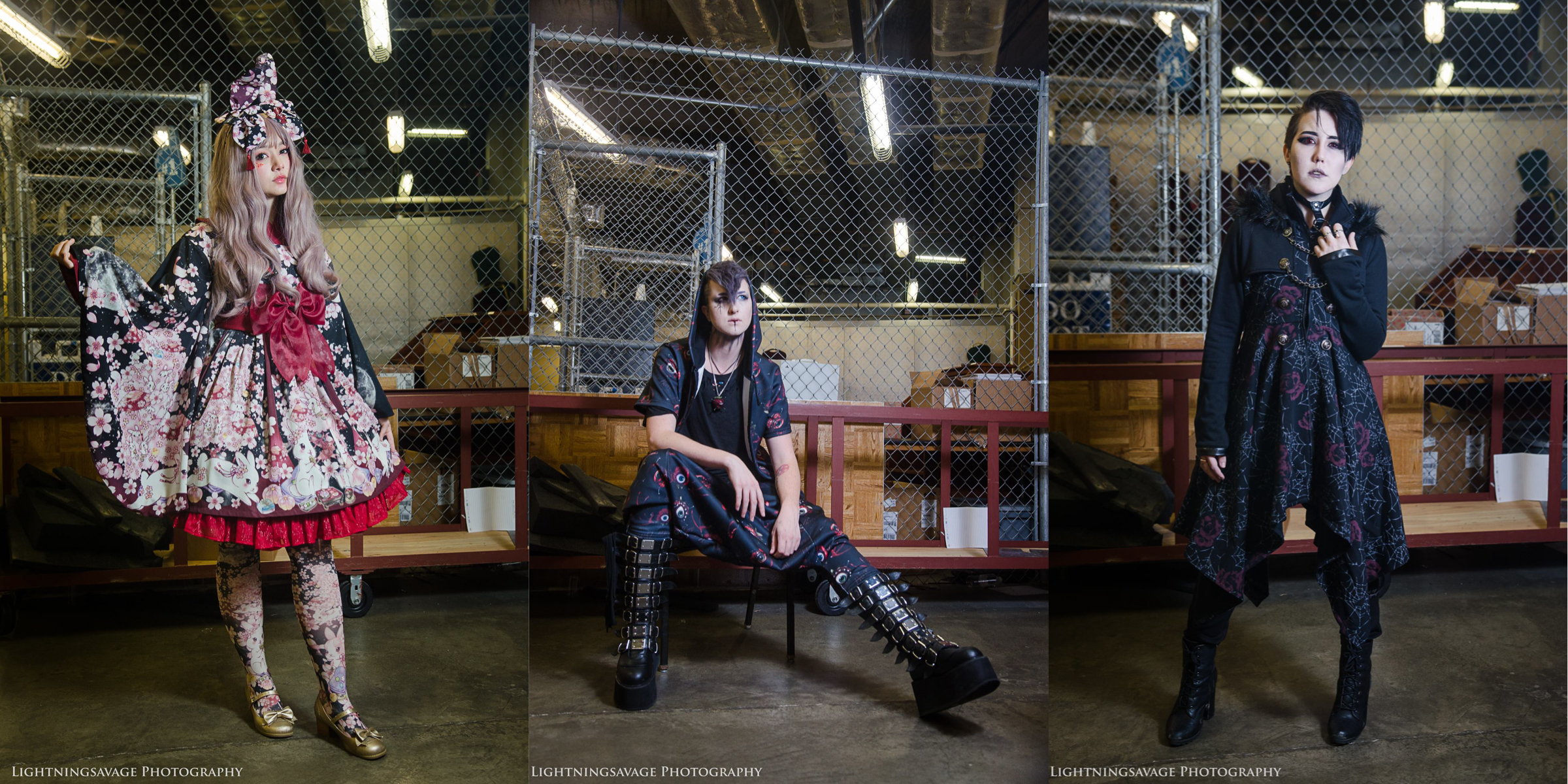 Once all the models had taken photos in their outfits, they were whisked away to a relaxed rehearsal where they learned their marks and practiced their poses. At this time, I was able to get some practice shots as the models walked. This let me get closer to the models and get ‘the shot’ without getting in the way during the show. I was actually able to get quite a few keeper shots this way, and give the models a few small tips as they walked (post on this coming soon!). 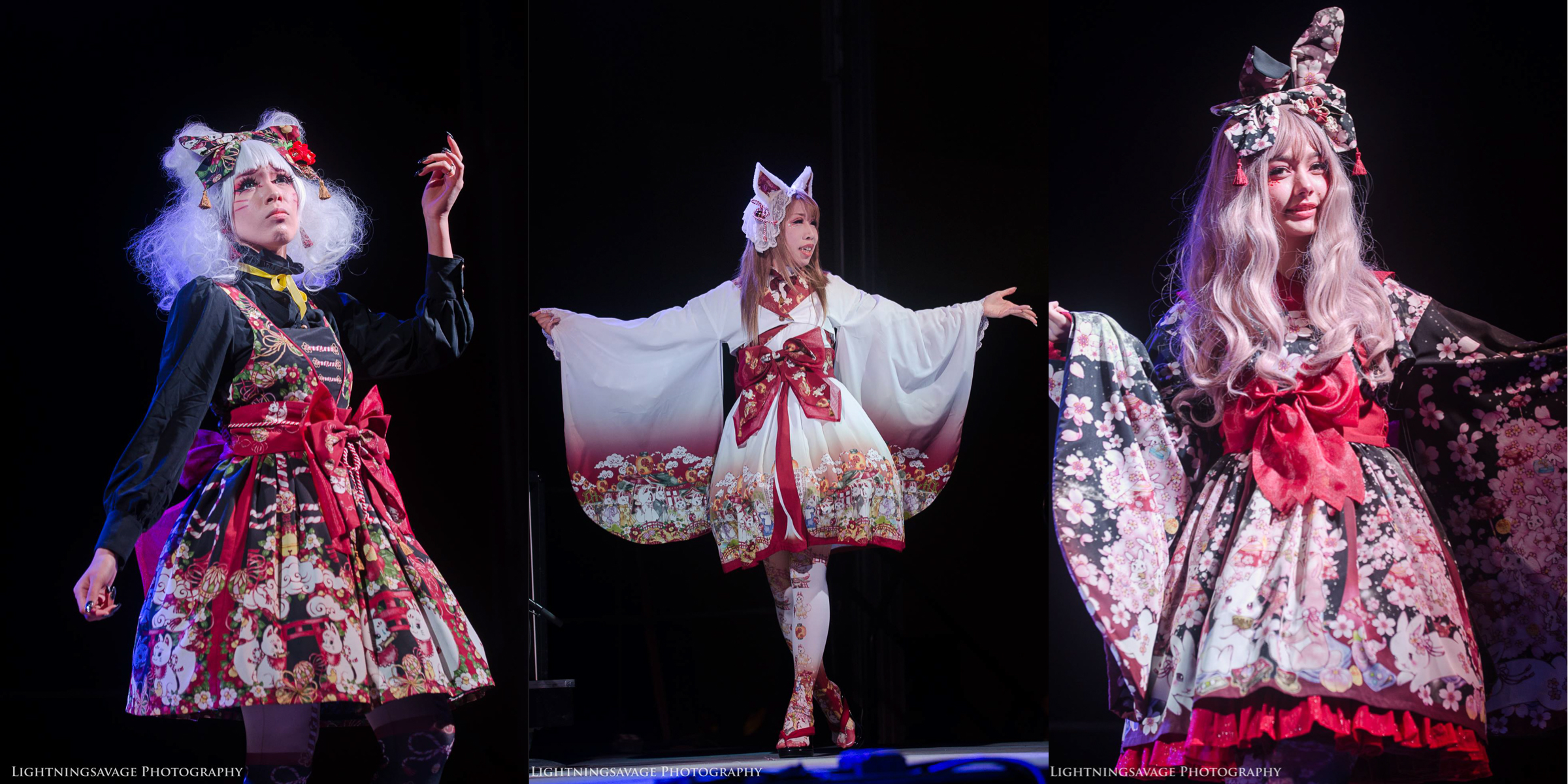 Royal Princess Alice went up on stage first. This Lolita fashion segment was about what you’d expect: graceful, flowery—but with an element of energy spearheaded by Aito-san herself. If you’ve ever seen her on stage, she has a fantastic presence. She loves movement, specifically in her sleeves, and energy. Rarely does she ever actually pose in a conventional sense. Rather, she chooses to exist in a constant state of movement. This lends a fun and rather informal feel to the show, a contrast to ‘regular’ Lolita fashion shows, which tend to be quite strict. Aito-san even threw her headdress out into the audience at one point!

Because this was her second year guesting at Oni-Con, you could tell that she was much more comfortable and relaxed onstage, with the staff, and with con attendees. This made her stage performance hold even more of her personality. Good for the audeince—not so easy for a photographer! 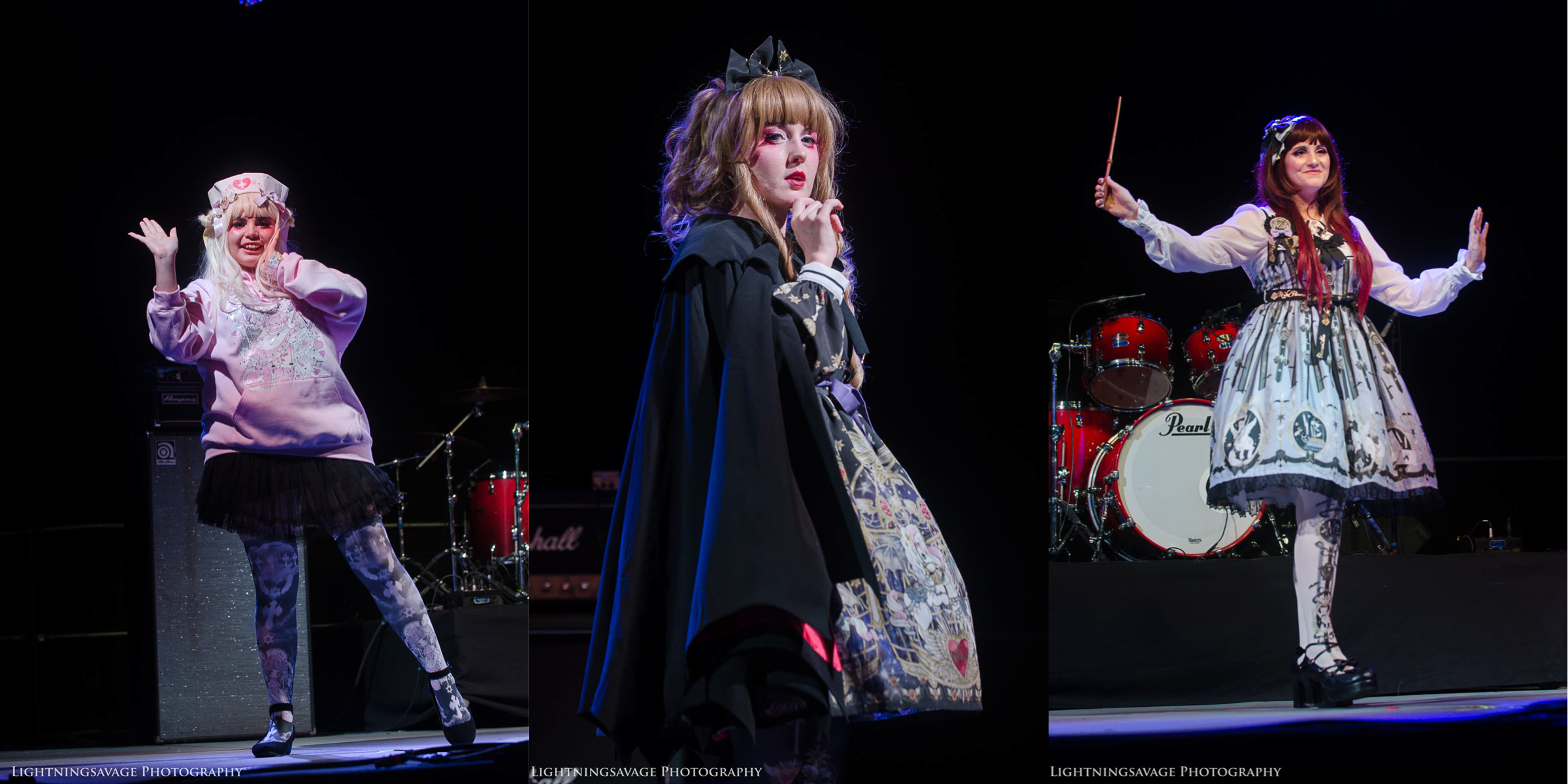 The second brand on stage was Bio Politics, Aito-san’s punk brand. Models walked on stage to DIR EN GREY. She wanted the models to be full of energy and personality. It was really fun to see a fashion show presented this way, specifically for punk fashion.

The Bio Politics models all wore a print called Monster Berry. Fun fact: when I first met Aito-san in 2017, she was dressed in head-to-toe Monster Berry! I loved it so much that I had to buy a jacket from her this year. 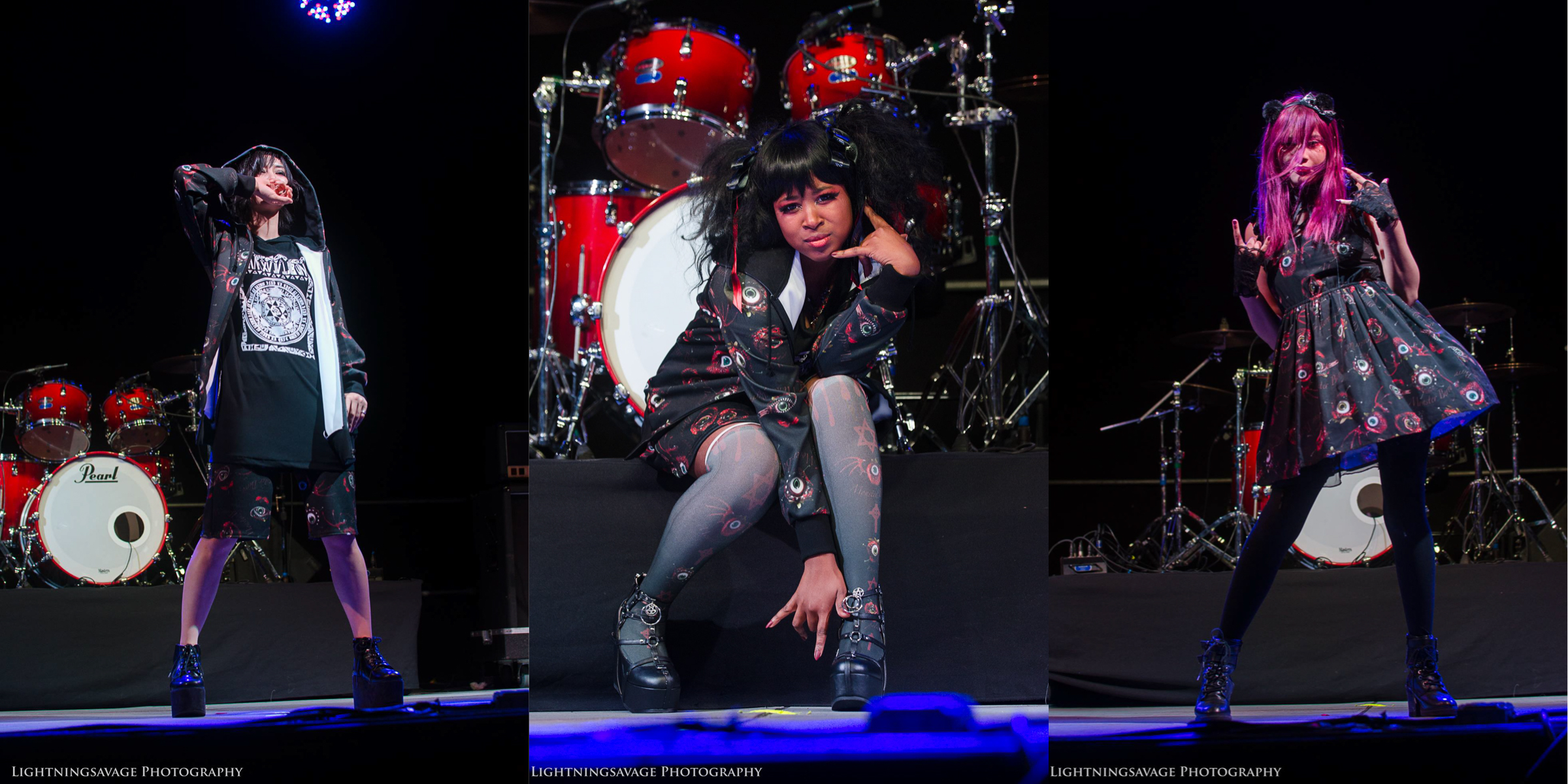 Then, finally, SEX POT ReVeNGe walked on stage. The models carried on much the same energy as the Bio Politics models—getting creative with their clothing, presenting their outfits in interesting ways, and generally having fun up on stage. This was SEX POT ReVeNGe’s first international fashion show, and Kroy (brand representative and co-designer) was really impressed by the attendee’s reception to the brand both onstage and off. In fact, SEX POT ReVeNGe sold out the morning of the fashion show, less than halfway through the convention! 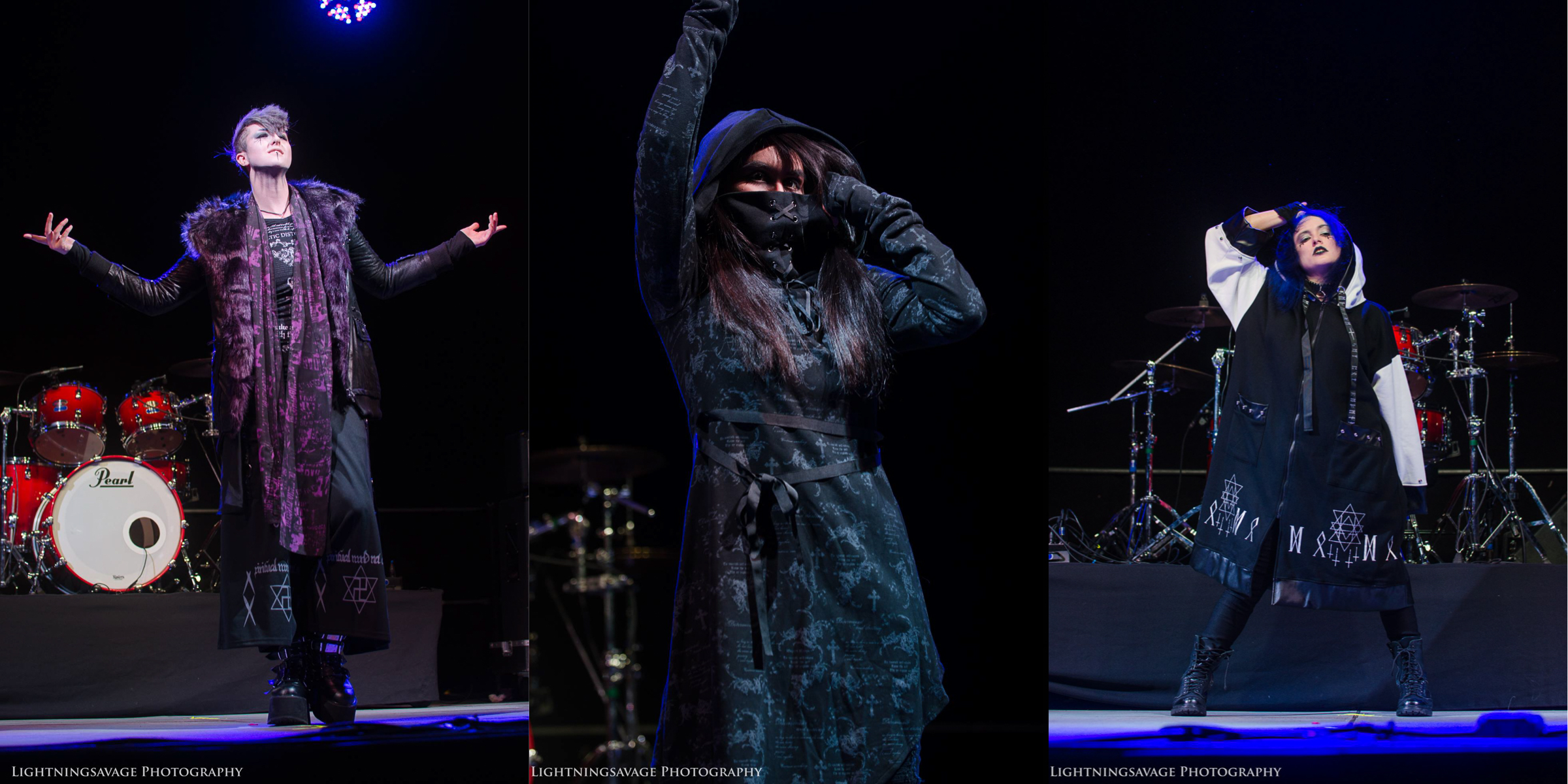 As the show progressed, I faced an interesting challenge. Whenever I’m shooting with another photographer, or in this case videographer, I respect that person’s space and their shot. Knowing that Lovely Lor was also covering the convention, the last thing that I wanted was to get in her shot walking back and forth for each model. Luckily, I didn’t really have to worry about this for this show because of where she and I were set up, and because of how the angles worked. 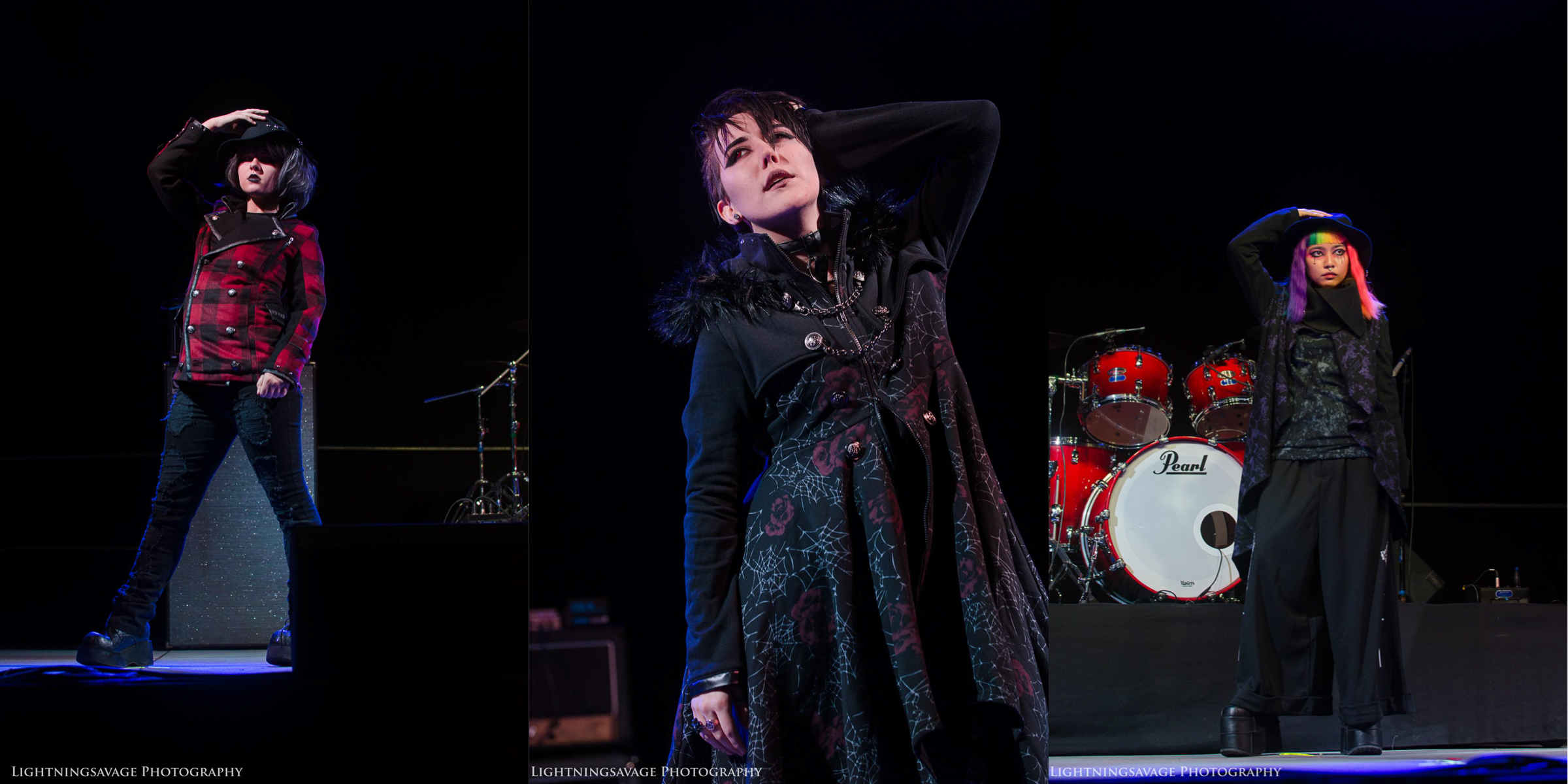 Lovely Lor has released her video coverage of the convention, and you can see her video here.

It’s a bit unreal to watch video coverage of the fashion show. Since I was shooting, I was watching the fashion show through my viewfinder. This means that, for the most part, I missed most of the poses since I can’t see when my shutter is open. Watching Lor’s video really made me notice just how good of a job these models did! 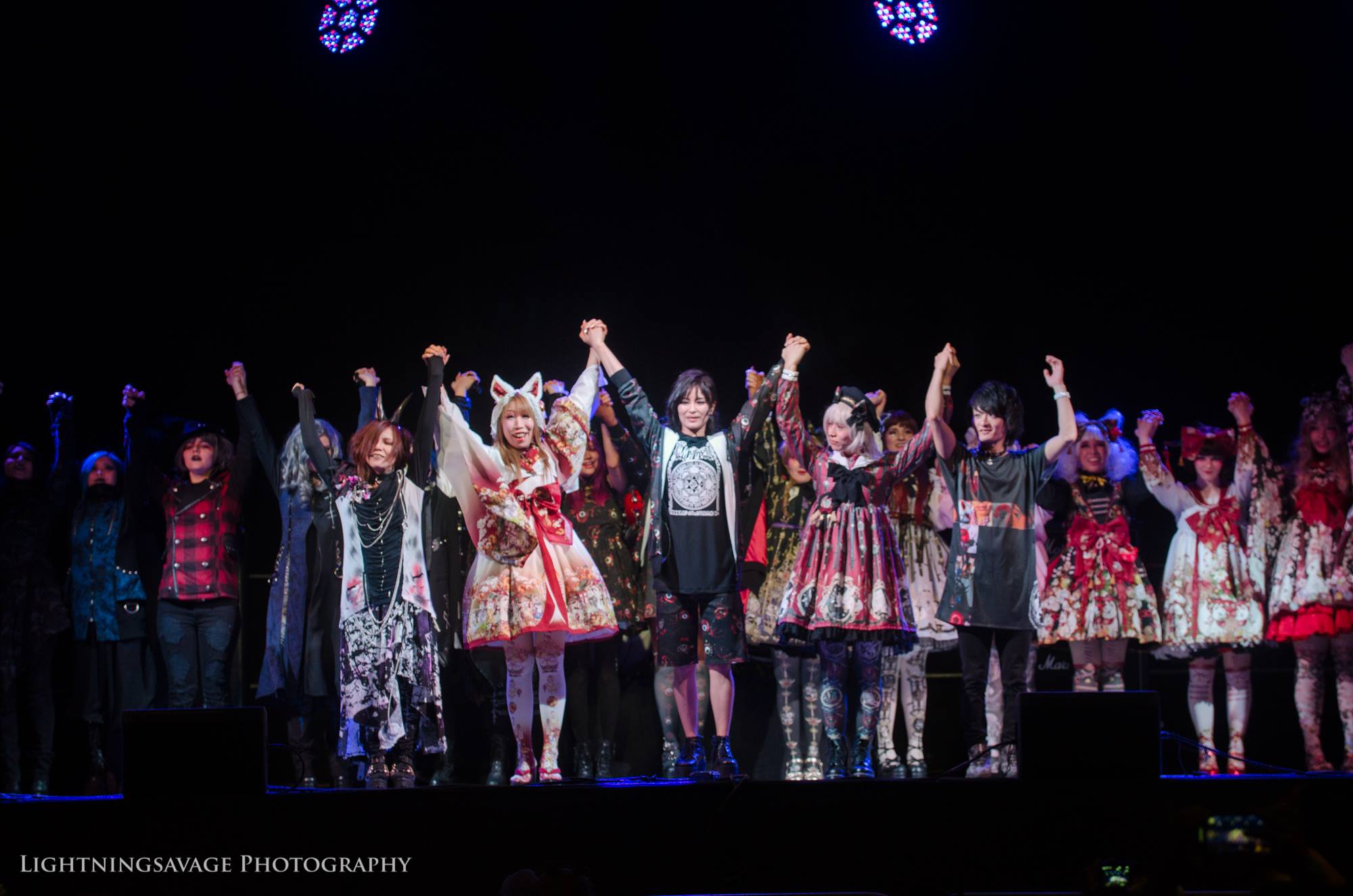