Sweet-Classic Lolita: Is It Even a Thing? 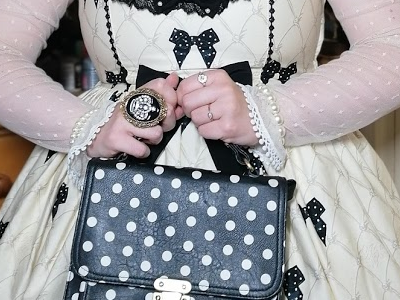 As lolita fashion continues, new terms and labels emerge for things both new and existing. After all, what is now oldschool lolita used to be the only known kind of lolita. Amongst these terms you may have come across this one: sweet-classic lolita. Is it a substyle? A trend? A look? How did it come about? Read on as this article will shed some light on those matters. And hopefully we will come to define what sweet-classic means too.

Before delving into the nature of sweet-classic, we must start off with its primary components. What makes a dress sweet and what makes it classic? Generally speaking, we are looking at three main things: dress colour, cut and print, if featured.

Your typical sweet lolita dress will most likely be pastel. It may use white or black as a base, but the print elements typically remain pastel. On the other hand, classic lolita uses muted shades and jewel tones. Ivory is a common base colour instead of white, though black is still popular. Think of these as what colours might feature in a contemporary child’s bedroom versus what a Victorian one. 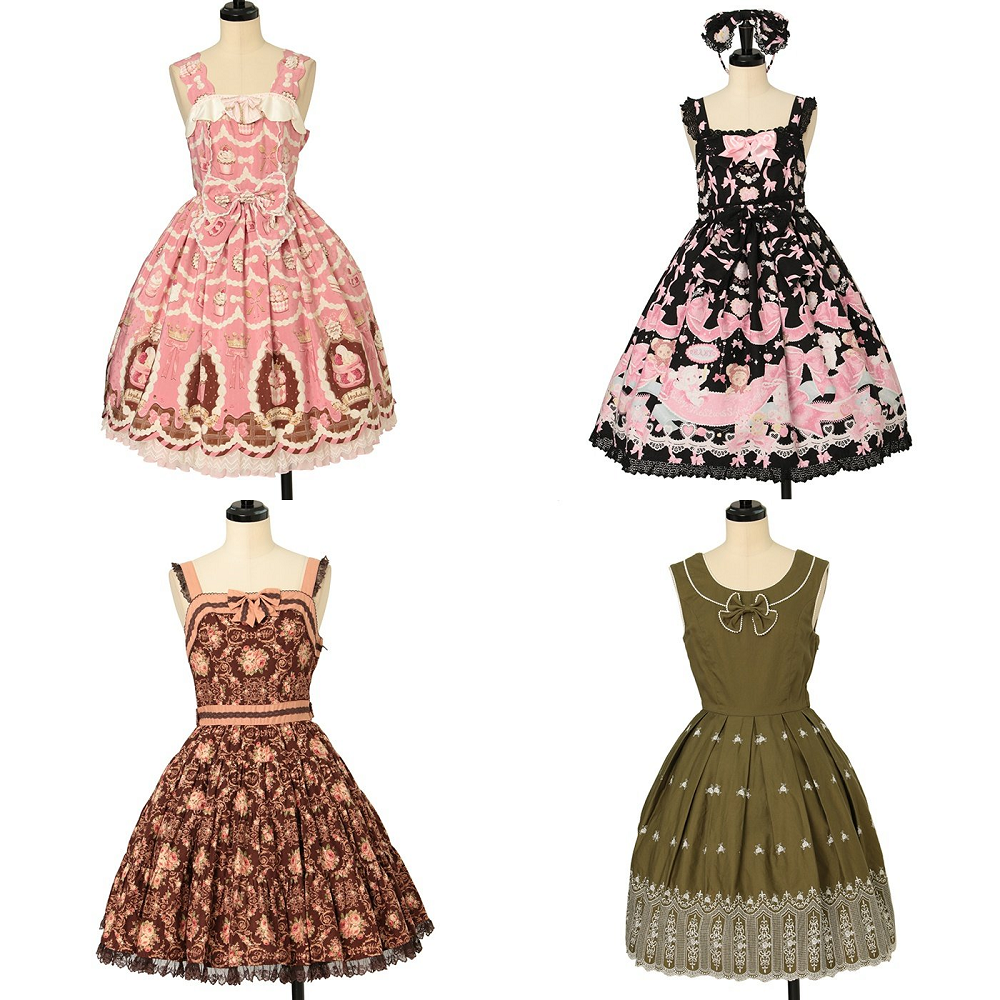 Compare the colour schemes between sweet dresses (top) and classic ones (bottom). Notice how sweet ones are brighter compared to the more muted classic ones.

Sweet lolita is all about being playful and fun, aiming for what we’d consider youthful cuts. Most commonly we see cupcake skirts, as well as babydoll/high waist and sack dresses. Classic lolita tends to have a more mature look, which people sometimes mistake for vintage fashion silhouettes. Although cupcake skirts can also be found, simpler and cleaner shapes such as A-lines are more common. Similarly, whilst sweet lolita will often use several different kinds of trims, classic pieces tend to be simpler, sticking to only a handful. 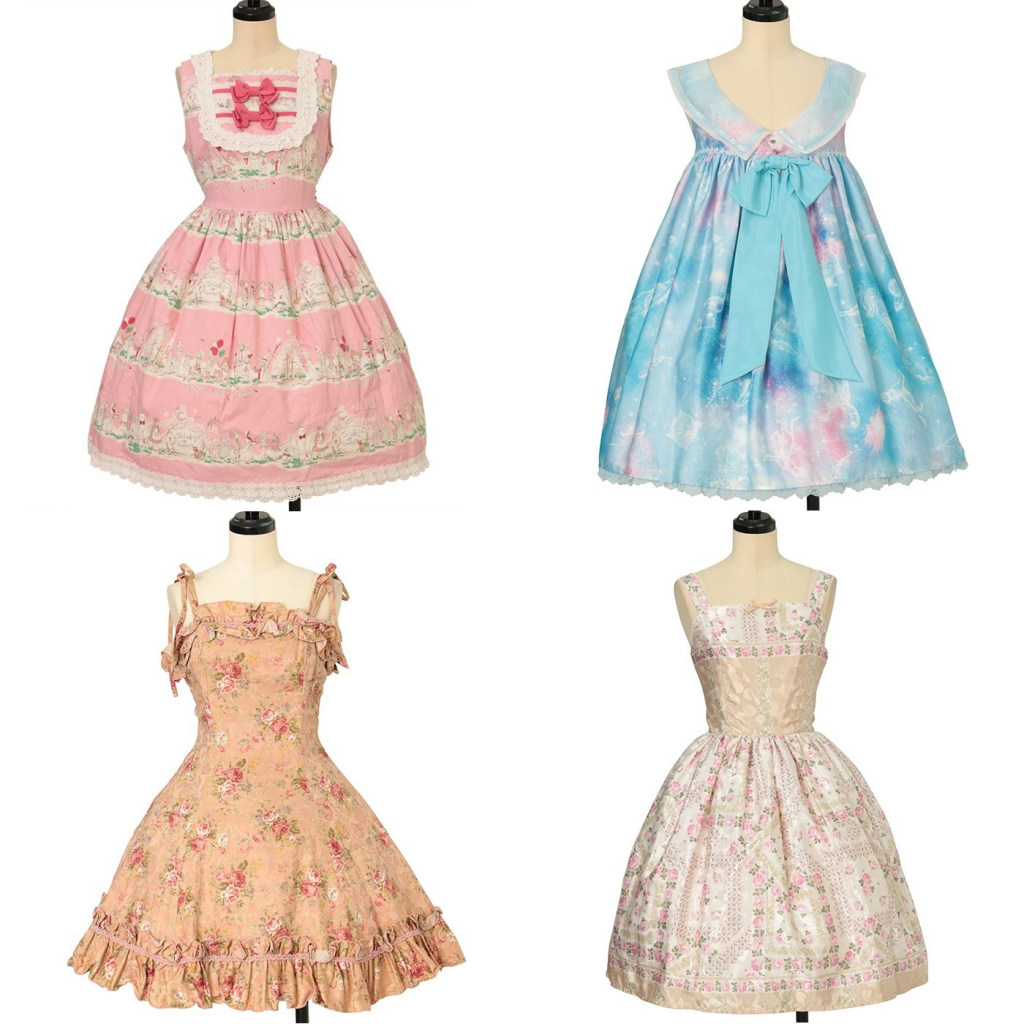 Now compare the cuts of sweet (top) and classic (bottom) jumperskirts. The sweet ones exude a youthful look, while the classic ones seem more mature. Even though bottom right has a cupcake skirt, it’s not very poofy or overly embellished.

When the pieces feature a print, the two styles will differ considerably in terms of the print theme and its execution. Foods, especially sweets, toys, cute animal characters and anything evoking childhood dreams dominate in sweet lolita. Classic lolita relies more on florals, royal ornaments or imagery, nature scenery and the like. As already mentioned, classic ones will likely use a softer, more subdued colour scheme compared to sweet ones. 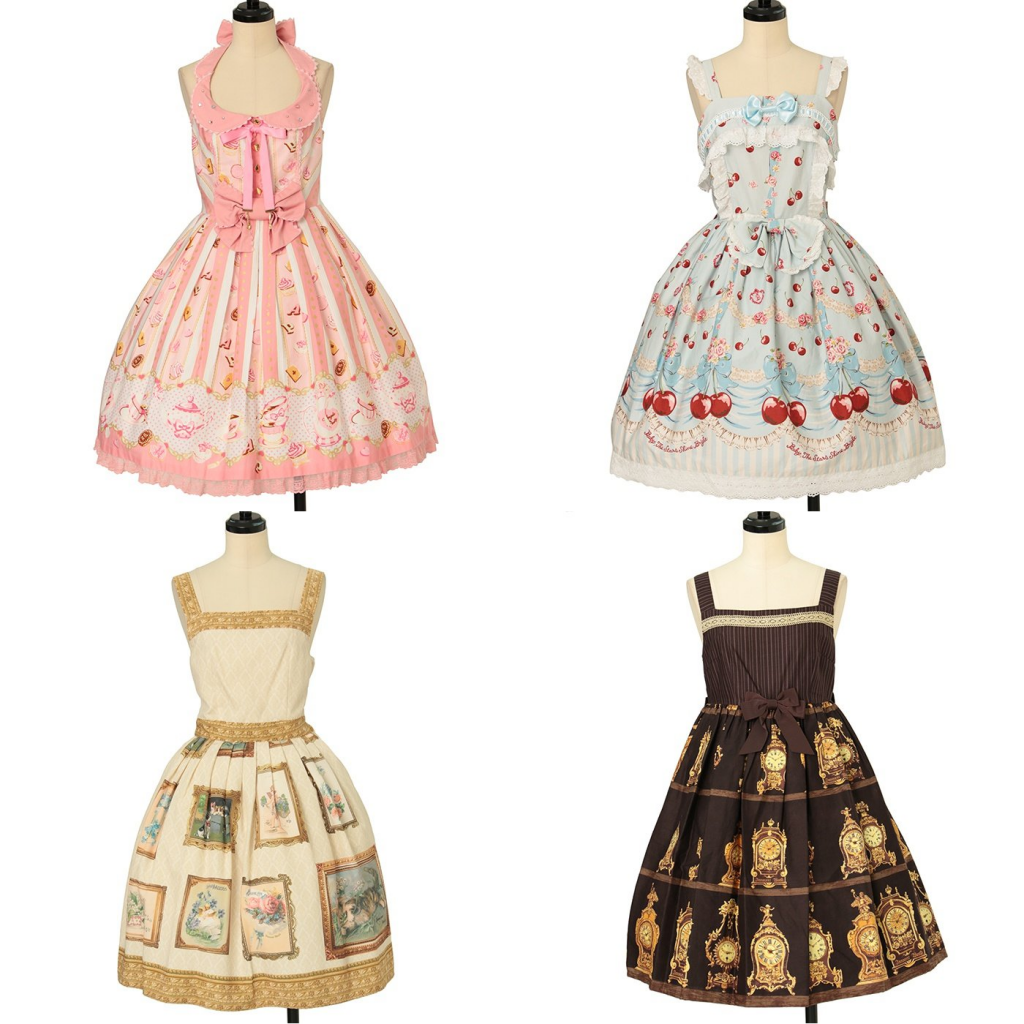 Print themes and their execution are also important when distinguishing sweet (top) from classic (bottom). Whilst there are themes that can be done in both ways, brands tend to stick to what they know well.

With the above in mind, it’s not hard to imagine that sweet-classic lolita covers the area of overlap between those two substyles. And as you can imagine, this can be quite big. Doubtless, you can think of some examples yourself. There are prints of sweets drawn in a more mature style using muted colours. You also have pastel pink dresses in simple, A-line cuts with minimal use of trims. And why not dusty florals on a cupcake skirt with lots of trims? Both base styles cover a large amount of different dresses, which means that possibilities are endless. So when did it first take place?

Interestingly, whilst we may think of sweet-classic as a newer concept, it is older than most people imagine. FYeahLolita has commented on the use of that term in 2011, when it has referred primarily to Innocent World and its lighter pastel pieces. Having said this, the post mentioned some BtSSB and Angelic Pretty releases too. It’s important to remember that in 2010-2011 sweet lolita continued to build momentum, which culminated in what we call the 2012 OTT Sweet phase. As such, classic brands like Innocent World expanded their looks with soft pastel colours and cuter themes. This is most likely how the first kind of sweet-classic lolita came about. In comparison, nowadays we tend to understand this term differently. We associate it more with sweet prints in jewel tone colourways or in cuts inspired by/leaning to otome fashion. Classic lolita has changed very little in its colours, cuts and print themes since the first sweet-classic stage. On the other hand, sweet lolita has matured compared to what it has been at the height of its popularity. Thus you could say that although sweet-classic lolita first became a talking point in the early 2010’s, it’s had a break of being overshadowed by 2012 OTT Sweet. After it re-emerged as a ‘thing’, it has evolved into a slightly different look. Moreover, whilst around 2011 sweet-classic lolita look was championed by Innocent World, its newer version is best seen through Angelic Pretty. 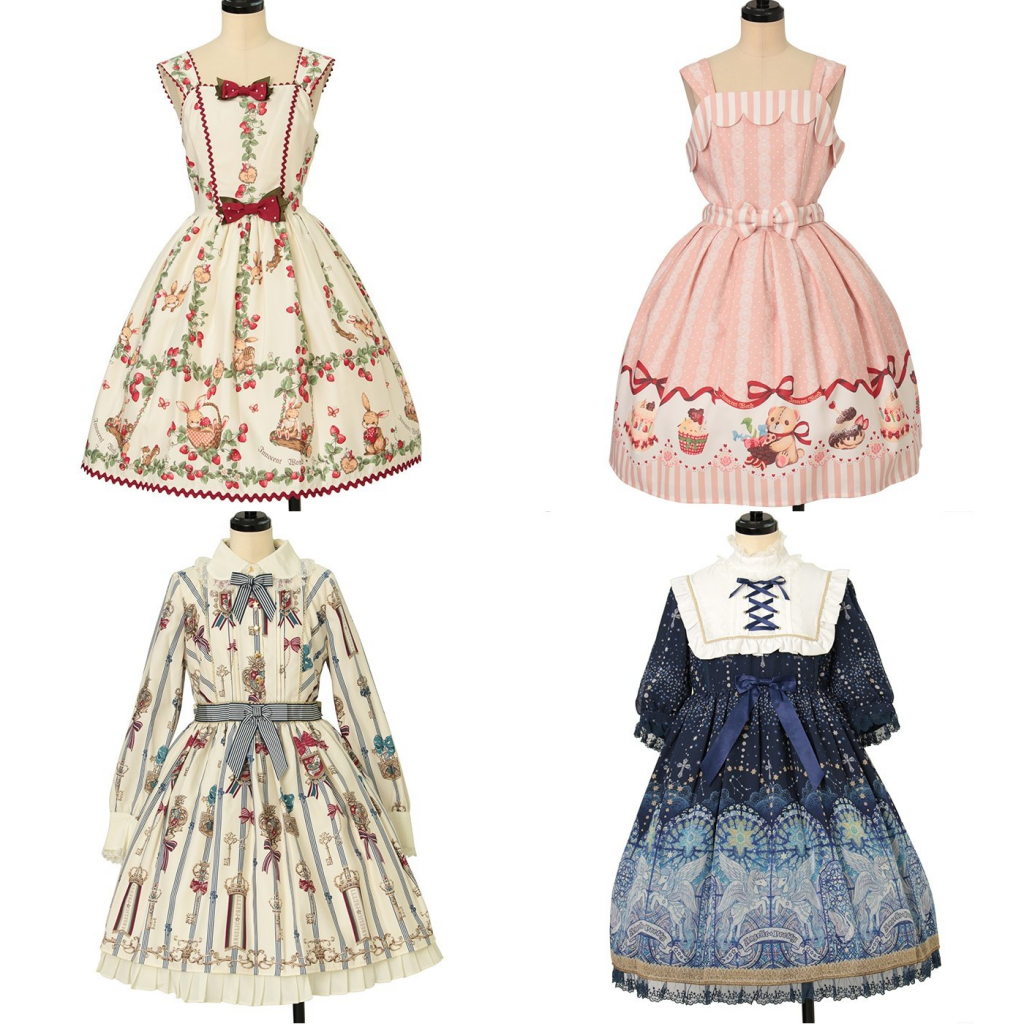 It’s interesting to compare the earlier sweet-classic pieces (top) to the later ones (bottom). Although all of those could be called sweet-classic, they feel distinctly different from each other.

As already stated, Angelic Pretty is the best example of the new sweet-classic look. Looking at their printed releases from as far back as 2003, we can see that the point of transition occurred in 2014. That year out of approximately 30 print releases, just under half had a print that leaned classic in style. A third of all print releases in that year were also available in what we’d consider classic colourways. The same goes for cut styles, where a third of JSKs, OPs and skirts each were in classic cuts. 2014 is the year that brought with it the now iconic releases such as Crystal Dream Carnival, Mercator Antique Shop, Cameo Window or Romantic Rose Letter. All four of those are amazing examples of modern sweet-classic lolita, each showcasing a slightly different aspect of that look. Looking at what other brands were releasing in 2014 you can see that Angelic Pretty were following a wider trend at that time. 2014 is roughly when OTT Classic had a moment with excessive underskirts and madonna crowns. At that time even a sweet brand like Angelic Pretty followed suit to ensure a good flow of sales. So even if their mature looking prints and jewel tone colourways became more recognisable as emblematic of that time, they were not alone in releasing dresses like this. As such, it is 2014 when the lolita community started talking about sweet-classic again since the early 2010’s.

We could consider these prints the embodiment of what sweet-classic lolita means nowadays. Though, of course, there are many more examples, particularly recently. All images taken from Lolibrary.org

Is It a Substyle Then?

It would be a stretch to call sweet-classic lolita a standalone substyle. Not only does it draw inspiration from too many different places, it is also too varied to neatly pinpoint. Although in 2011 FYeahLolita has managed to identify some common points, as the fashion mixes with other styles even more, those boundaries continue to blur. With influences from otome and larme, as well as the OTT trends coming from China, even what we consider sweet or classic lolita has changed. We can certainly consider this a look and ‘sweet-classic’ is a catchy label for it, not unlike bittersweet lolita. Still, having an easy label helps with tagging outfits on social media and finding inspiration that way. And given not only how far back we can date the mentions of sweet-classic, but also its prevalent use, it is fair to admit that it is, at least, a thing.

How to Achieve a Sweet-Classic Look?

As mentioned earlier, this look draws inspiration from two substyles with plenty of diverse looks within them. As such, it’s hard to pinpoint what exactly pushes a coordinate in the right direction. How to put the coordinate together will also depend on the main piece used. A typically classic piece will be styled differently for a sweet-classic look than a typically sweet dress would. You can follow some of the suggestions for making sweet lolita look more mature, as well as the general tips from FYeahLolita. Achieving a sweet-classic look is all about balance and detail. Those with more experience in lolita fashion will find it easier to successfully balance those two substyles without leaning too much into either. However, with so many releases from the past 5 years or so taking inspiration from other J-fashions such as otome, newcomers with the right looking main pieces can also successfully manage this look, especially when using OPs. 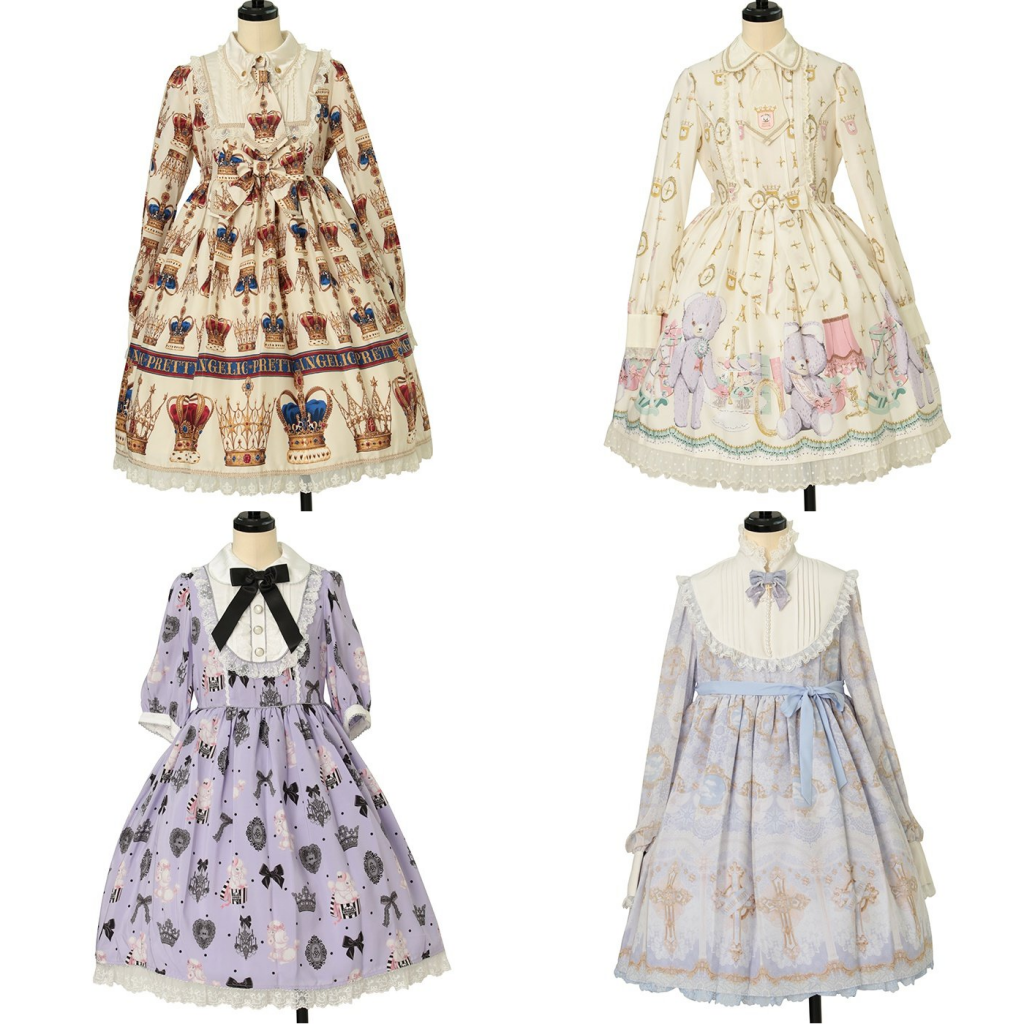 With an OP like one of these, putting together a sweet-classic coordinate becomes a lot easier!

For more inspiration and to see the sheer diversity of looks within the sweet-classic spectrum, you can follow the #sweetclassiclolita hashtag on Instagram. Depending on what kind of sweet-classic look you are after, consider adding lolita-adjacent tags as well. Anything from #retrololita to #morilolita could yield results that fit your particular taste. Once you find a handful of accounts with the style you like, finding both new tags and new accounts to follow will become easier. The best advice I can offer is to remain open minded. The diversity of sweet-classic coordinates means that there may be things to your taste hidden amidst posts that you would not normally consider or like. And in the meantime, if sweet-classic is something that you wear, make sure to tag it as such on Instagram and Alice Holic to add to the pool of inspiration for others!