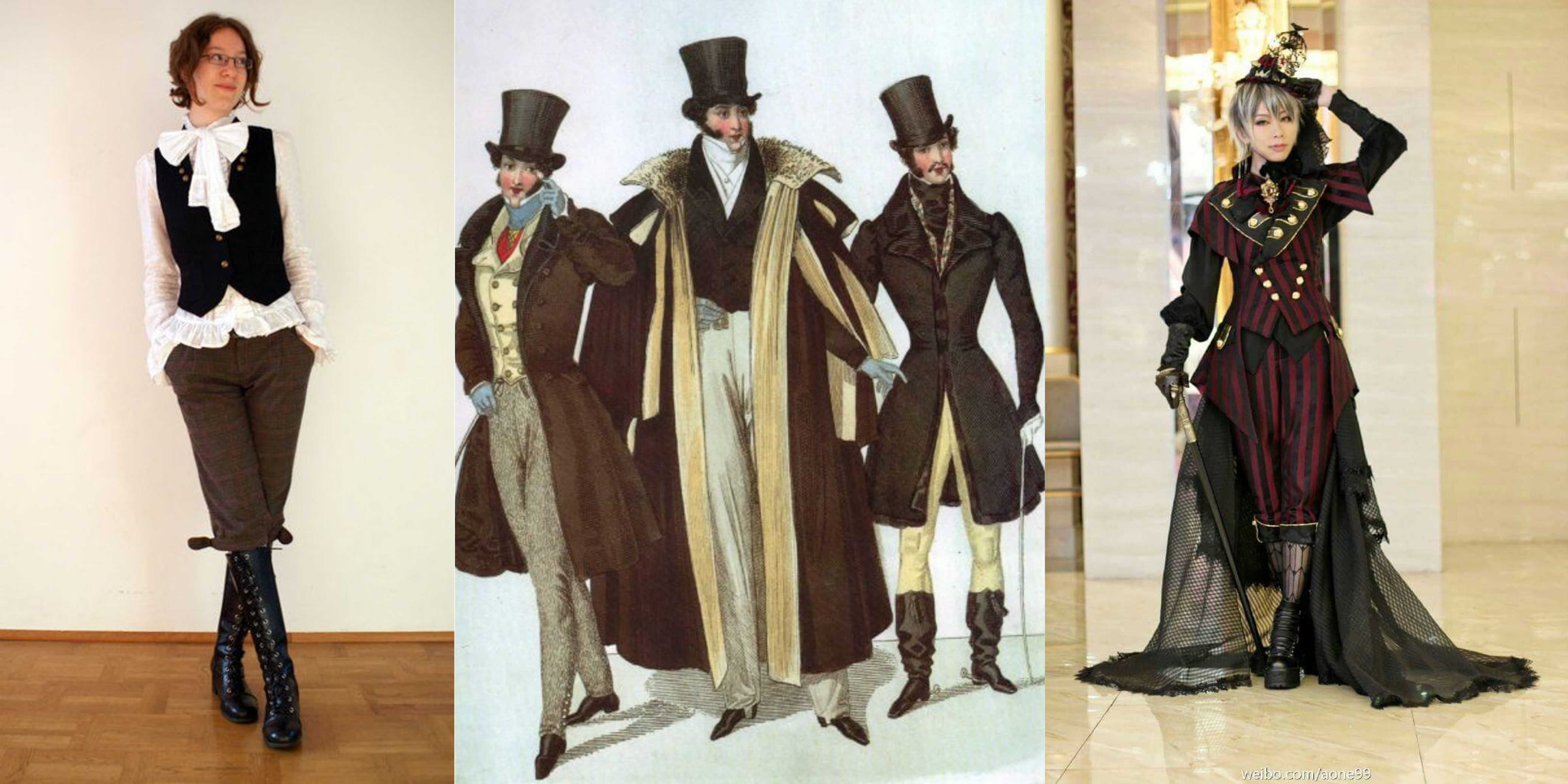 Something I’ve found in my time in the Japanese fashion community is confusion and misconceptions around a ouji—people calling it dandy and kodona or aristocrat, and the other way around. Many people, because of the confusion, tend to just lump all these styles together under the “boystyle” umbrella. When I was first introduced to the community, I was guilty of this as well until I stopped using the terms kodona and dandy altogether.

Recently, a friend and I had a short conversation where I found out what dandy actually was. Combined with a persistent confusion I used to have between aristocrat and ouji (and where that line is), I thought I’d make an informative post about them, include examples, and maybe some websites directing you to some shopping resources for each one.

Originating in London and Paris in the 18th century, dandy fashion, or dandyism, was a way for men of the time to express themselves through fashion. It was a way for men to enjoy their clothing and break free from the boring fashion of the time. Back then, the fashion included a lot of lace, jewelry, and even wigs and corsets. At the time, there were two regional styles of dandy, with two silhouettes: British and Parisian. 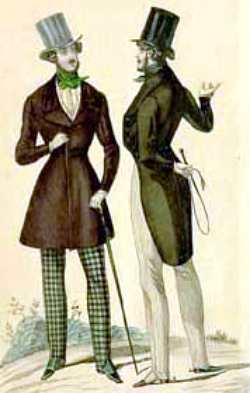 Dandyism has evolved quite a bit over the years, moving away from lace and corsets and more toward a “well-dressed gentleman” look. Well-tailored suits, vests, and pants are a staple in modern-day dandy, as is a meticulous eye for detail. Still, modern dandys don’t overdress—but the typical rule is that if it fits well and looks good and portrays your confidence, it’s acceptable!

When it comes to hair and grooming, no detail is left untouched. Tousled hair and a 5-o’clock shadows won’t be found here—unless it’s intentional.

Though you can buy dandy clothing pretty much anywhere, Fanplusfriend offers quite a bit of dandy items!

Visually, Elegant Gothic Aristocrat (EGA) is only similar to dandy in that it’s a style that describes grown men. Colors in this style favor black and white, but can also branch out to jewel tones. 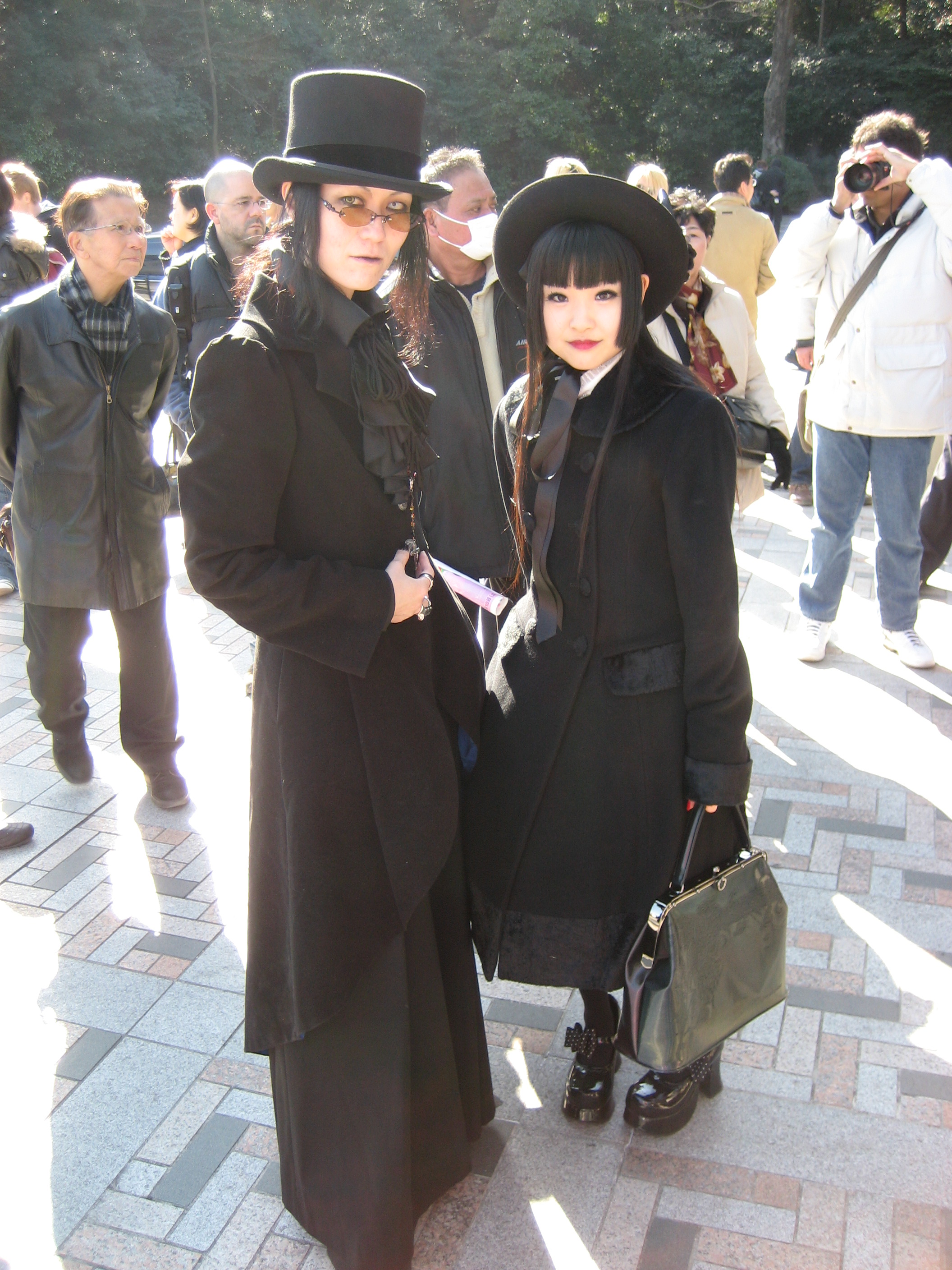 By Iriseyes at the English Wikipedia, CC BY-SA 3.0, https://commons.wikimedia.org/w/index.php?curid=2681477

Dark makeup, corsets, skirts, and more can be worn by anyone, as this style favors androgyny and elegance. The long silhouette is common; wide pants, long sleeves, jabot, and hats are common too. Pants are an important distinction here.

In contrast to dandy (worn in Europe in the 1800s), aristocrat is a more modern Japanese fashion. The term EGA was coined by Mana-sama, who we all know and love! Aristocrats take inspiration from dandy, however it’s pretty obvious that this fashion has gone in its own direction. 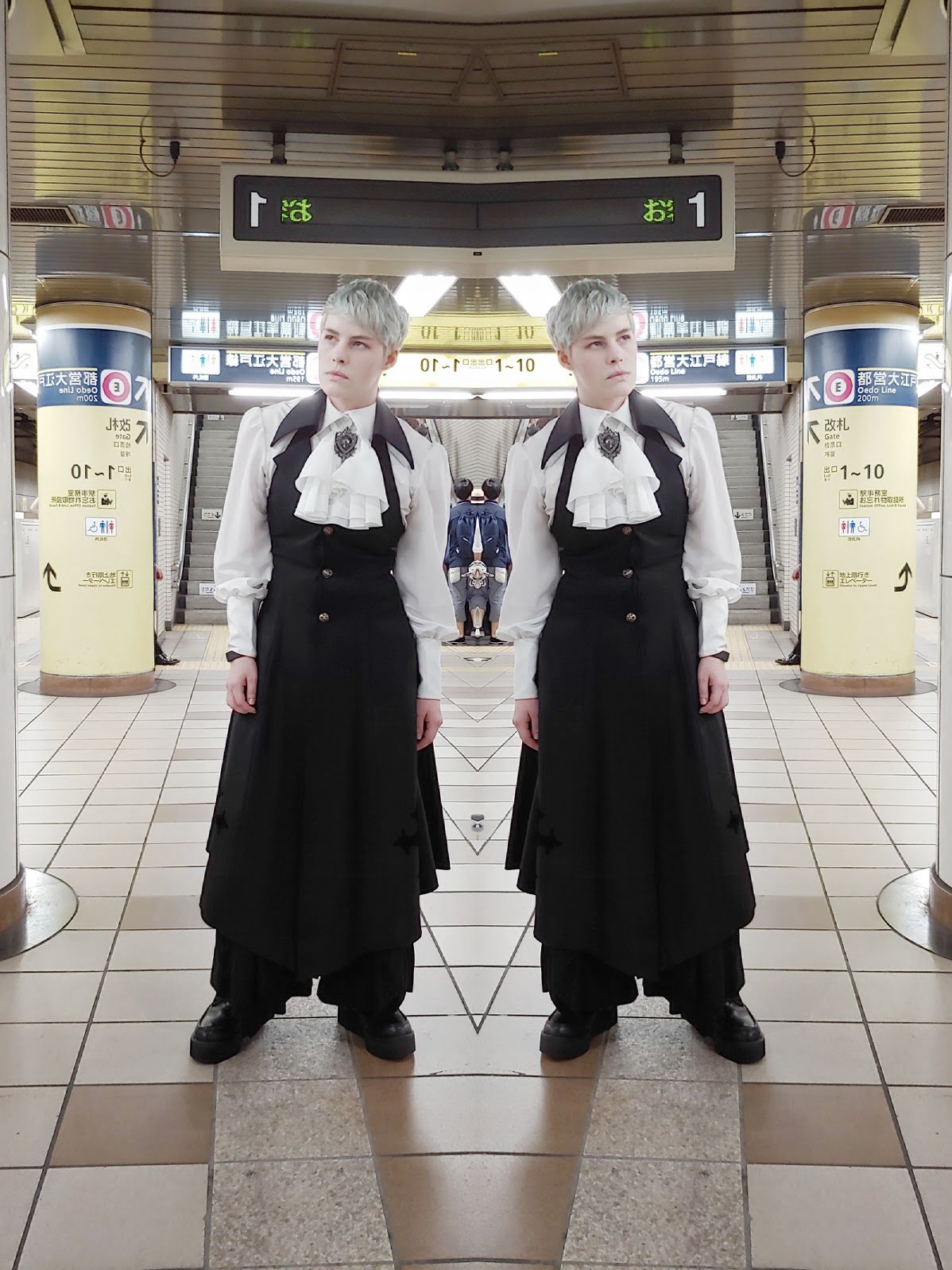 Moi Meme Moitie, Atelier Boz, and Alice and the Pirates all have pieces that will fit well into this style. In fact, many brands that sell ouji pieces will also sell items that can be used for aristocrat—and many of the same items can be used for this style too.

This one is the one I’ve heard confused with ouji most often, and is the most related. From my research on forums and other sources, kodona is a much more youthful style than dandy or aristocrat, but made up of more ill-fitting (but not unsightly) clothing. This person is not a prince; he is a young pubescent boy of the working class. A young victorian boy. 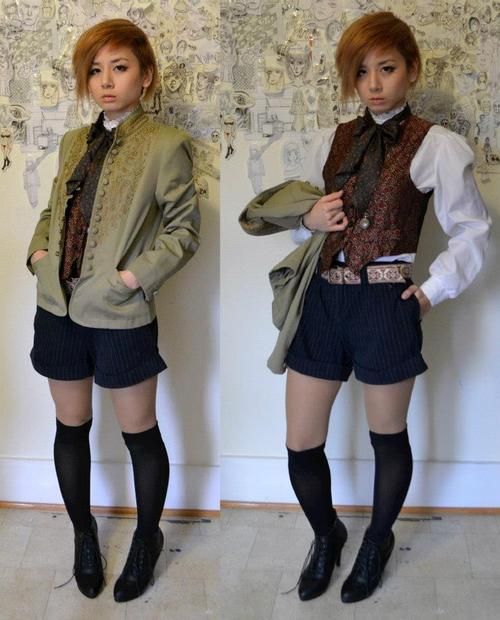 Kodona. Pulled from Pinterest (had no source). If you know the source, please let me know.

There’s an insightful post made by bellmare in 2009 that has a better description:

“Term made known by Ryutaro, from the band Plastic Tree. It was used by parents to describe the awkward, pubescent stage that their children would go through. The real meaning would be along the lines of “Being at puberty age; who is neither quite adult nor child;”. Ryutaro brought this up in an issue of the Gothic & Lolita Bible, to describe himself. Often Kodona outfits will include cute, awkward, ill-fitting pieces (Not un-flattering however). Think back to the great depression when youth was limited to only one pair of shoes, and hand-me-downs. Often a shirt will be either too baggy or too tight, and shoes would often never fit either. There was always a cute, awkward boyish quality in the outfits though. Kodona is a fairly vast style, so it can either be simple, to wholesome, to punky.”

It’s differentiated from ouji based on fit, fabrics, colors, and accessories—even if the clothing pieces have the same cut. 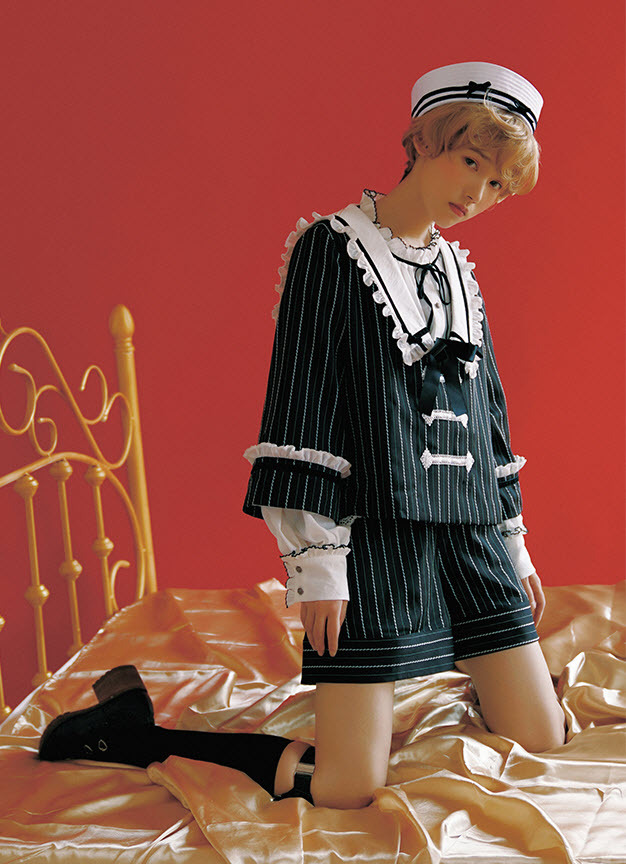 Thrifting is always an option for this style, but if you’re stuck on brand there’s a lot of sellers, specifically on taobao, who sell clothing that can pass as kodona. A bonus: many sellers on taobao have extended sizing! A good resource for these taobao brands if you’re in the US and are too lazy for a shopping service is Lolita Wardrobe since they have an entire section dedicated to ouji and kodona pieces.

Many brands from the ouji section offer pieces that can be used for kodona too!

Literally, the word ouji means “prince.” Try to take this literally: rich colors, over the top accessories, crowns, and more. Branch out to more royal or nicer-looking fabrics like suede and polyester and velvet instead of cotton. Keep things well-fitting and tailored if you can, for sure! 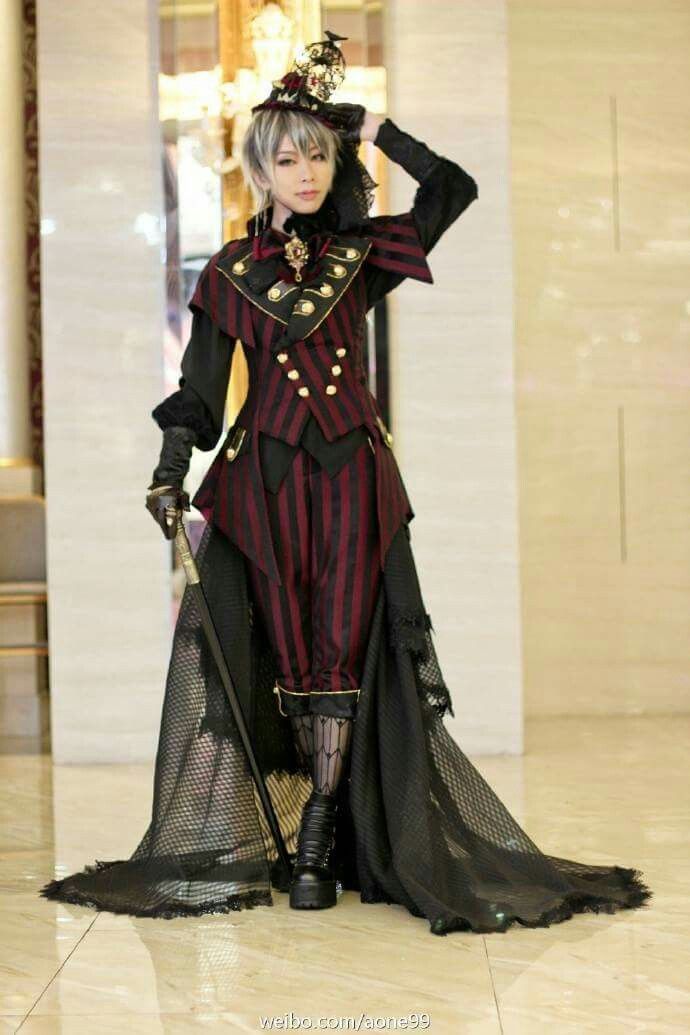 Many brands cater to this style, since it is more popular in the Japanese fashion realm than kodona and dandy. Think Atelier Boz and Alice and the Pirates, Metamorphose and Atelier Pierrot.

It's time for another ouji coord comparison! 🖤 Here's another example of how you can use the same main piece in coords and still have a unique look. Swapping out your shoes for another style, or using pants that are longer or shorter can make a big difference. Also with ouji, your hat will be one of the first things people see, so changing it for a different one is a simple way to change your look! 🎩 Last but not least, makeup can have a big impact on your appearance, so try playing around with different colors, styles, and amounts to see how they change your coord! . . . . . . #alternativefashion #altstyle #japanfashion #eglcommunity #lolitacommunity #streetfashion #lolitastyle #tokyostyle #dansou #lolitafashion #harajukustyle #ouji #gothiclolita #atelierboz #alternativestyle #jfashion #innocentworld #bodyline #btssb #piratestyle #ゴシックロリータ

I hope this article helped at least a little bit in understanding these terms. As always, if you have any questions, please point them to me on Instagram at @kaldec_!