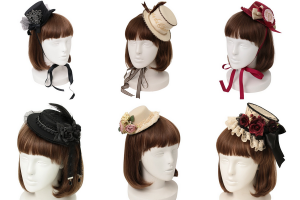 Some things just have a bad rep in lolita fashion. Animal ears are one of them, as are mini-hats. However, while the trash talk about animal ears is gradually waning, I am not seeing the same favour being given to mini-hats. So this post will do two things. Firstly, it will convince the non-believers and show how to wear mini-hats well in lolita. And secondly, it will show to mini-hat fans that they are not alone.

Why the bad rep for mini-hats?

Not to sound like a lolita granny, but back when the West first got a whiff of lolita fashion it wasn’t so easy to purchase. The make-do attitude of the early 2000’s differed between the street snaps from Japan and what Western lolitas shared on Livejournal. Having seen FRUiTS and KERA street snaps feature mini-hats, Western lolitas turned to the equivalents that they could find. Those were often mini-hats sold in party costume shops, Claire’s Accessories or Target. And what did they have in common? They were all poor quality. So once an awareness of balance and what makes an outfit ita developed, lolitas shunned mini-hats en masse.

Some examples of authentic coordinates using mini-hats. All photos were sourced using Pinterest and come predominantly from old GLB and KERA scans.

Why should we forgive mini-hats?

Mostly because if we could forgive animal ears and start bringing those back, then why shouldn’t we do the same for mini-hats? The same arguments could apply to both of those items. Brands certainly made mini-hats, just as they make animal ears. If they are good quality, then they won’t look out of place in a lolita coordinate. And if the mini-hats fit with the theme of the coord, then like animal ears, there’s no reason for them not to be included. Besides, they could work for any substyle of EGL fashion (except possibly aristocrat) more easily than cutesy ears. 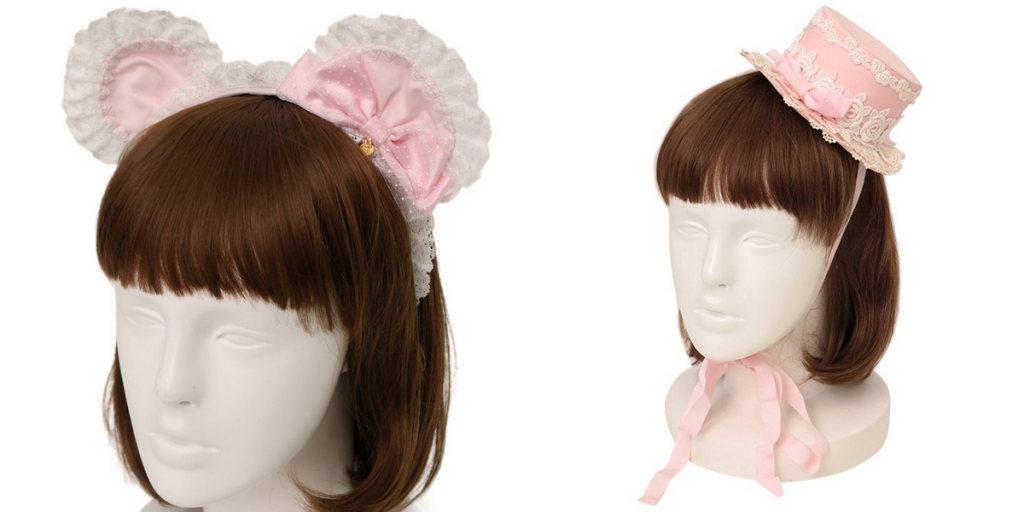 The community is not mostly ok with one, so why not the other? The bear ears are from BtSSB and the hat is from Angelic Pretty.

However, unlike animal ears, mini-hats are considerably harder to coordinate well. And the reason for this is balance. Animal ears, by their very nature, come in pairs, whether on headbands or as clips. While with the latter kind you could clip only one ear for disability representation, I’m yet to see anyone do that. A pair of ears will sit evenly on your head, with one ear on each side. Moreover, they are usually large enough to balance out the big skirt.

With mini-hats their very size can be a problem. Compared to a poofy skirt, they seem almost comically tiny and simply struggle to balance that out. On the other hand is the placement of mini-hats. Should you wear it to the side or at the centre? Both might seem off, but how else could you wear it? That brings me to my next and final point!

How to make mini-hats work?

With these few tips you are bound to incorporate mini-hats into your coords like a pro. No-one will dare to call your outfits ita!

This should go without saying, but getting mini-hats that are good quality is crucial. Don’t commit the mistakes of the lolitas before you. Forget any mainstream shopping outlet, whether it’s Claire’s or Amazon. Instead look for mini-hats made for lolita fashion or made by independent creators who understand the need for quality within lolita. Stay away from thin materials, overly shiny trims and instead look for something realistic. Whether they are just hats or whether they resemble something else, you want them to look like that thing, but shrunk in size. Although brands rarely make mini-hats now, you can often find them inexpensively second hand – including on Wunderwelt! 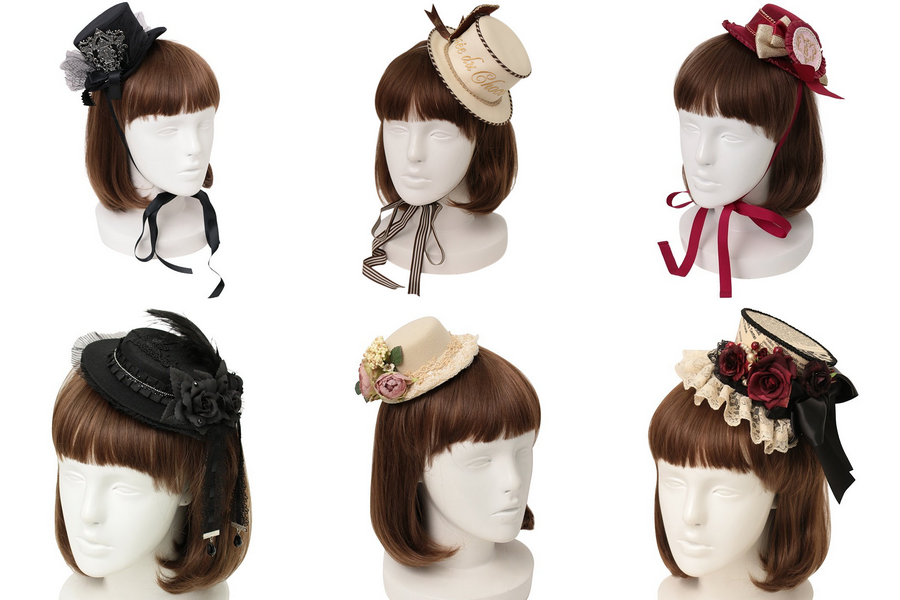 Quality comes at various prices. The top row mini-hats are from Japanese brands: Moi-meme-Moitie, Angelic Pretty, and BtSSB. And the bottom row are indie brands: Cutie Creator, Private Square, corgi corgi. You really don’t have to be shopping at Claire’s.

This actually does two things. On the hand, big hair fills the gap otherwise that mini-hats leave on your head. So whether you wear them on the side or at the centre, use your hair to frame the accessory. The hairstyle doesn’t have to be elaborate, it simply needs to have some height and at least a little volume. For example, high ponytails are great as anyone with longer hair could do them or you could use twin tail wig attachments to help you. 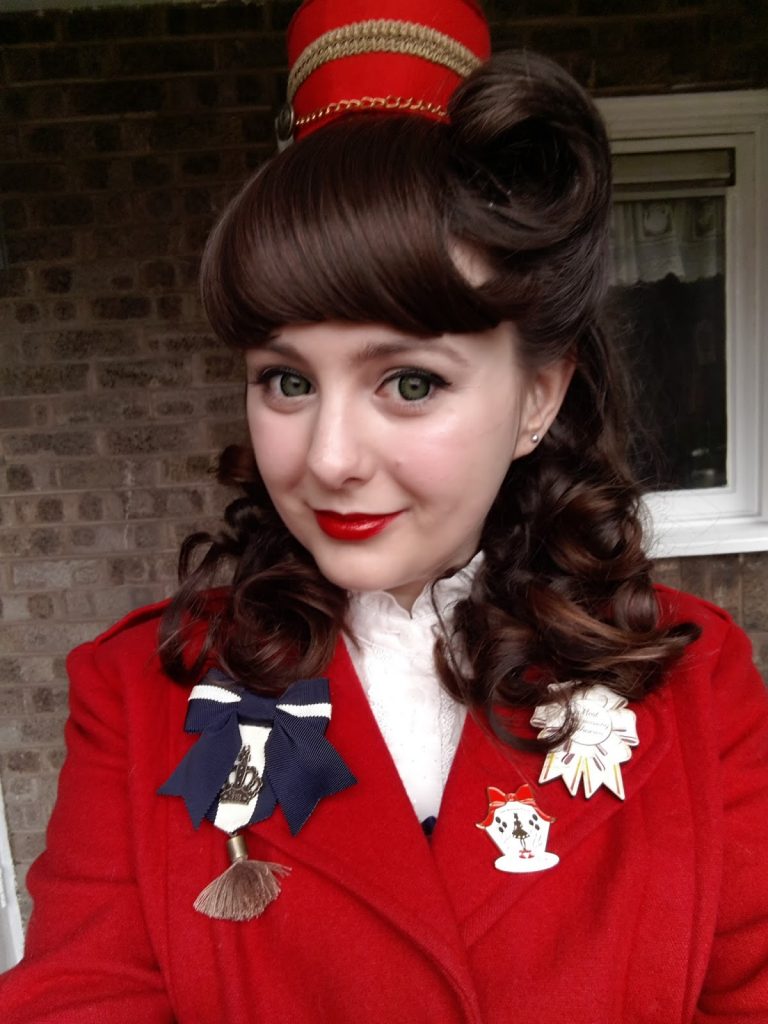 A mini-hat next to a victory roll is one of my personal favourite looks. This one here is from an indie creator, Sheena’s Bella Bows.

On the other hand, remember that mini-hats are too small to balance out the volume of your skirt. By pairing them with big hair, it is the size and/or volume of your hairstyle that balances out your poof instead. Mini-hats still play a part in the coord, but now you can use them to bring colour balance to the outfit or to tie in a theme. 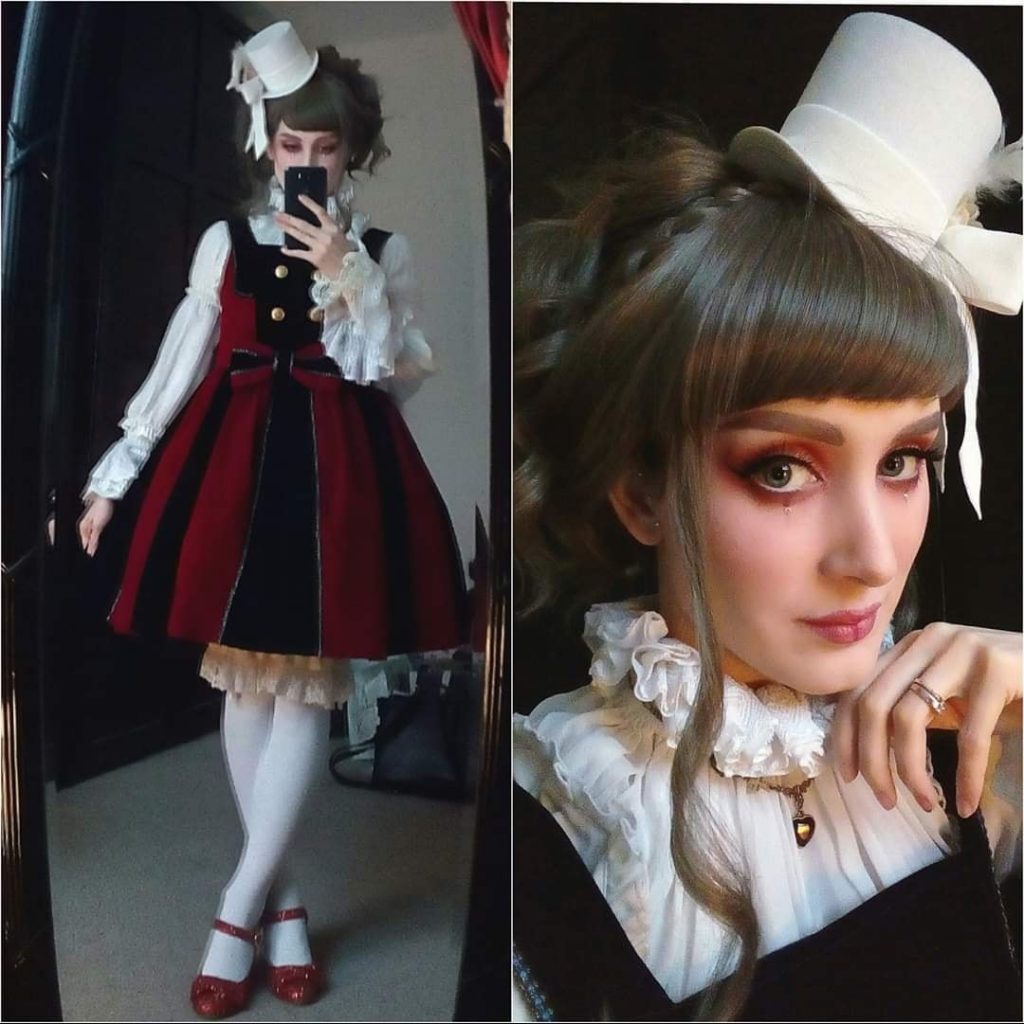 Notice the large braid on the side that balances out Sarah’s (@househaunter) Triple Fortune mini-hat. A hairstyle doesn’t have to be complicated, it simply needs to be large.

You can use other accessories in the same way as you would big hair. Again, they are there to fill in the void left by mini-hats and to add volume to match that of your petticoat. What’s great about this approach is that you can match it to your style because not all outfits have to be decora-level OTT. Consider the size of those other accessories and how you would incorporate them around mini-hats. Of course, you can go down the OTT route of adding lots of smaller clips around the hat until you’re happy. But that’s not for everyone, even if it makes it easier to wear mini-hats at the centre. For a more toned-down approach consider a medium-to-large headbow that sits to the side or maybe a clip-on veil for a more dramatic look. 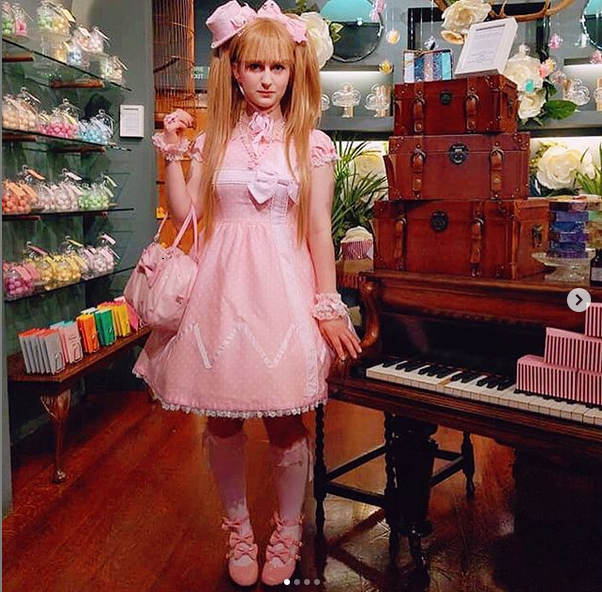 Hana (@xxmissingsisterxx) in a master of mini-hats. She balanced her Angelic Pretty one not only with a bow clip, but also with high ponytails.

Go back up to those oldschool snaps from earlier. The reason why mini-hats worked with those outfits despite the often flatter hairstyles was the equally smaller petticoats. As mini-hats were quite popular in the early 2000’s, you could totally just wear them with coords that go for that look. But equally you could work out something a bit more modern that works well with a smaller poof. Plenty of brands still make dresses that only fit a small petticoat or that you could wear without one if you wanted to. In other words, reducing the volume in your lower half reduces the need for volume in your upper one. 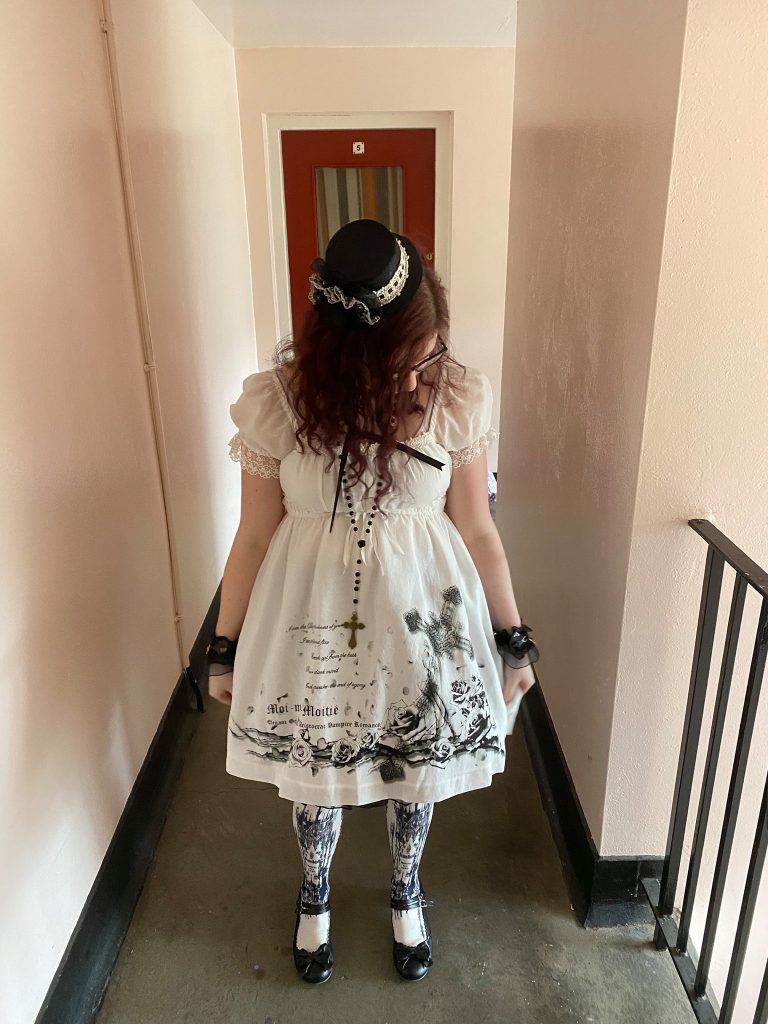 A smaller petticoat and a slightly bigger hat make for a great solution. Eleanor’s  (@st_owly) mini-hat is from Moi-meme-Moitie. 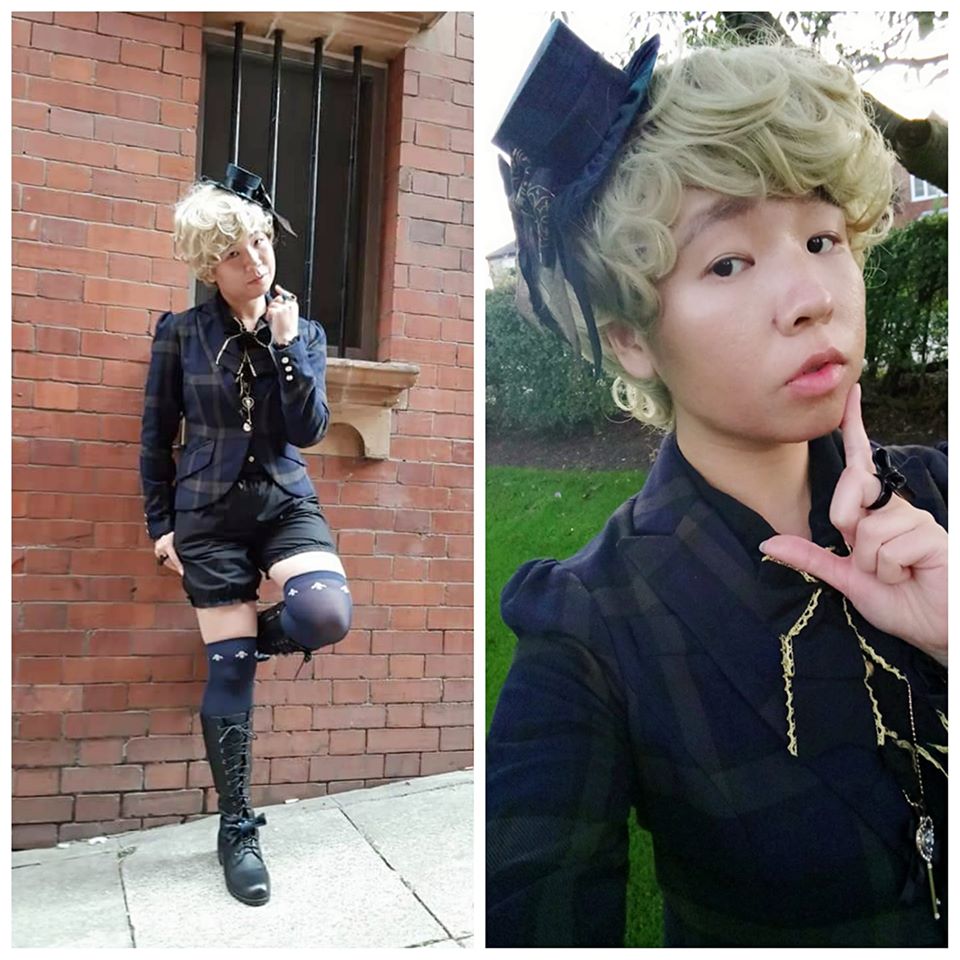 Or you can skip a skirt altogether by opting for an ouji coordinate instead. Rachel’s (@inkonsakura) mini-hat is handmade by herself to match the outfit perfectly.

For a hat to be considered mini it doesn’t have to be completely tiny. Some mini-hats are larger than others, whilst still too small to consider them full-size. Also, not every head is the same size and even a full-sized hat can be too small on some people. And remember that your hairstyle will affect that further. As such the same mini-hat might look larger when you leave your hair curly than when you straighten it. So try to figure out what size would work best for you and look out for those.

Just because a hat is described as mini doesn’t mean that they’ll all be the same size. The outer two are from BtSSB and the middle one is from Metamorphose.

Mini-hats don’t have to be an ita staple and hopefully this article has shown you how great they can look when styled right. Remember to go for good quality ones and match your dresses, including in theme where appropriate, just like with animal ears. When coordinating them, remember the two factors: filling the void on your head and balancing out your poof, and you’ll be fine. And don’t forget to share your coords using mini-hats on Alice Holic to prove all the non-believers wrong!