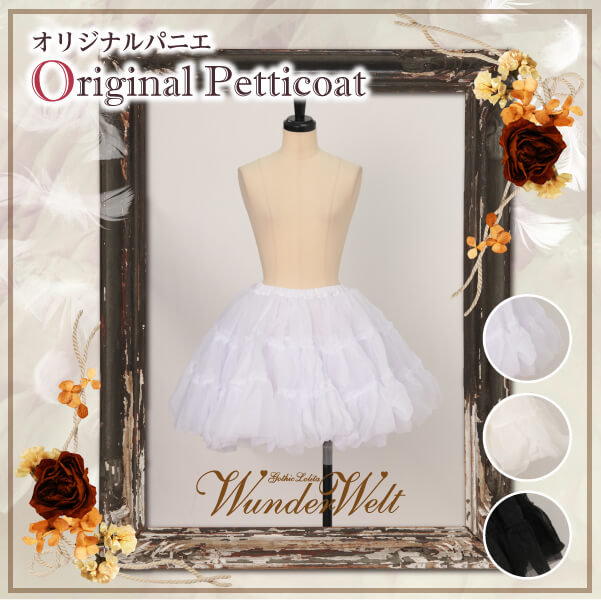 Was “get a better petticoat” one of your resolutions for 2021? Did you start the year with the best intentions and then found the amount of choice overwhelming? Wunderwelt’s Original Petticoat has been around for a while now, but sometimes reviews aren’t enough. Sometimes you need the hard facts, as well as the opinions. And thanks to the collaboration with Joëlle from Fluffy Kawaii Jo, I can bring you precisely that! Strap in, this review will go into all the details we have.

The listing for the Original Petticoat claims it to be 45cm in length with the waist ranging from 60-100cm. Is this what you will get?

Firstly, when measuring the length of a petticoat we should actually exclude the width of the waistband. That part doesn’t support the dress or create poof, but merely keeps it on you. However, the waistband isn’t that wide, so you still get 42cm of the poofy part, which is very good.

The petticoat’s elastic actually measured 58cm at its smallest and 102cm at its most stretched out. A 2cm difference from the listed measurements isn’t so bad either, though in real life 2cm can be the difference between a comfortable fit and an uncomfortable one. Always remember that for a comfortable fit you should be around 5cm smaller than the maximum listed. And that is 5cm smaller both in your waist, where the petticoat sits, and in your hips or shoulders, since you have to get it on somehow. It may fit fine on your waist, but it’s no good if you can’t get it there. And since the Wunderwelt Original Petticoat comes in one size only, you want to pay close attention to those measurements.

How Poofy Is It?

This is the important part, isn’t it? We all want to know that the petticoat we’re buying will be as poofy as possible. This is where the real test began.

The petticoat was measured four times on a mannequin, once alone and then under three dresses: lightweight, medium and heavy. The poof was measured from the mannequin’s stand to the farthest edge of the petticoat or dress. Lastly, an average of these four measurements was taken to determine the poof.

And Wunderwelt’s Original Petticoat did consistently well in all of those! The petticoat alone measured an impressive 46cm poof, the most of every petticoat we tested. However, it gave in under the weight of each dress, a bit more so than some of the other petticoats. It still ended with an average poof of 41cm. The photos paint a better picture of what 41cm poof looks like, but let’s say that you’ll sooner use this petticoat for big tea parties than for casual or day-to-day activities. 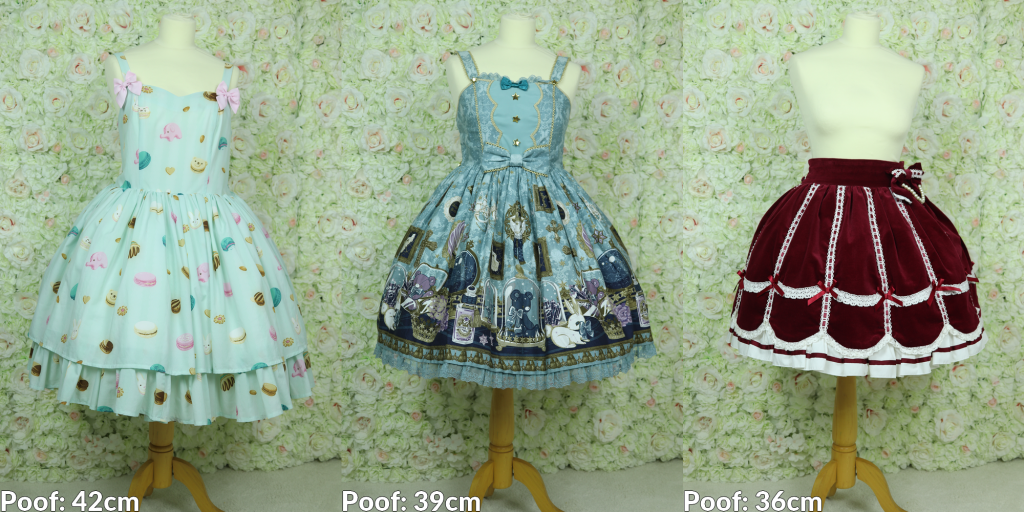 Will It Last Long?

How durable a petticoat is depends on a few factors: what fabric is it made out of, how much fabric is it made out of, how often do you wear it, and do you take proper care of it (i.e. storage and washing). Not every petticoat will require the same care and not every person will wear theirs out in the same amount of time. This is important to remember, if longevity is your concern.

Wunderwelt’s Original Petticoat is made out of polyester organza. This is a common fabric used in making petticoats, as organza holds shape quite well, but relies more on the amount of fabric than its stiffness. For example, tulle creates volume by being stiff, so tulle ones deflate as the fabric softens. On the other hand, chiffon is a very soft fabric, so for a chiffon petticoat to give any volume, you will need a lot of it. Organza sits somewhere between the two, which means that the petticoat can lose a bit of its volume over time, but it will take substantial and regular wear for that to happen. 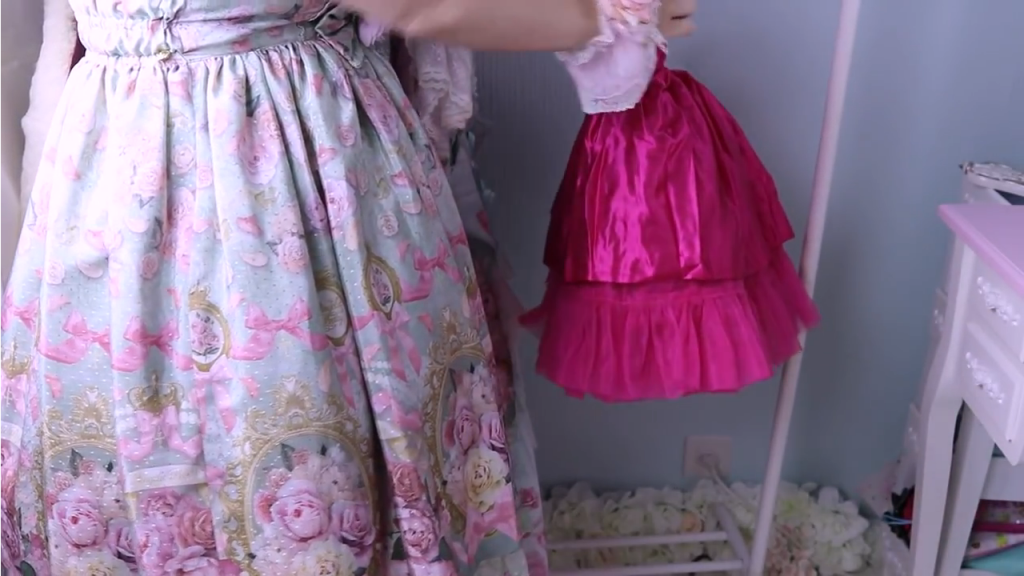 Moreover, the Wunderwelt’s Original Petticoat consists of four layers of fabric, each of which has three tiers. Those layers measure 15 metres in hem length, which is a lot of fabric to have. Because of this the petticoat will keep its volume for longer, as the amount of fabric works together with the semi-stiffness of organza to create volume.

The properties of organza fabric mean that for maximum durability you should store it hung inside out or flat. Rolling it up into a tight ball may result in the petticoat losing volume over time, though again, the amount of fabric will compensate for that a little. When washing, make sure to put it inside a laundry bag or a pillowcase for machine washing, or wash it by hand. To help it stay fluffy, you can dry it inside out and spread out on an open umbrella. And if you feel like doing some extra maintenance, spray some spray starch on each layer and let it dry like this. Starch is a quick-fix to give your petticoat back a bit of oomph, but it’s not a long term solution to keeping it as poofy as the day you got it. 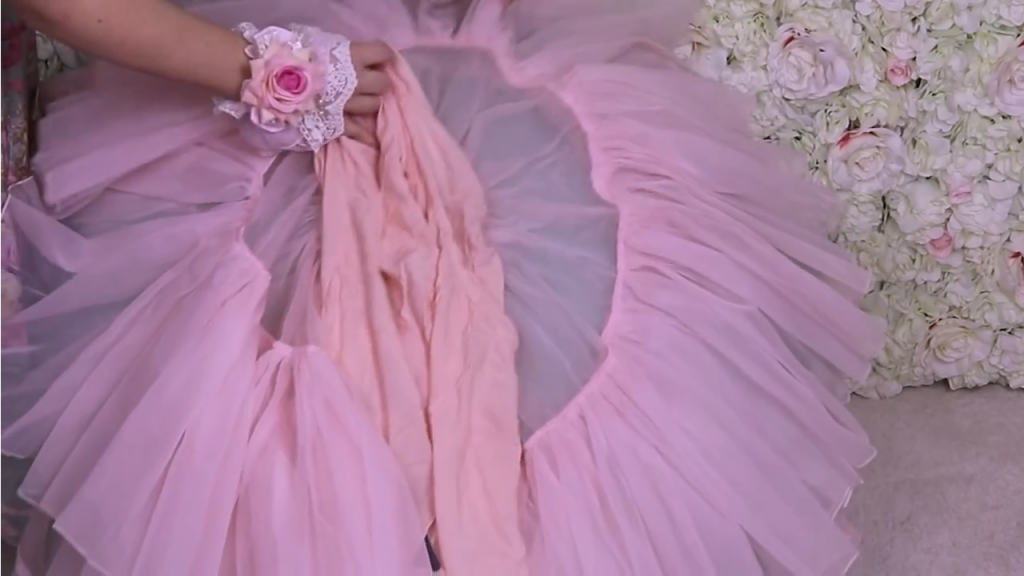 Is the Petticoat Comfortable?

Of course, comfort is a subjective matter. We all have different sensitivities to different types of fabrics, as well as different comfort thresholds. However, for the purpose of this review Joëlle and I turned comfort into five measurable categories. Together they allow for a maximum of 5 points and the Wunderwelt Original Petticoat did pretty well, scoring 4 out of 5.

Additionally to this, we measured the petticoat’s weight, which came to 425 grams. This is about the same weight as an average lolita dress – or about as much as a big pot of yoghurt. This is pretty in the middle of the range that we have tested, not the lightest and not the heaviest. As such wearing the petticoat shouldn’t tire you out purely because of its weight, even when worn for long periods of time.

This in-depth look at the Wunderwelt Original Petticoat was done in collaboration with Joëlle from Fluffy Kawaii Jo as part of her quest to find the ultimate lolita fashion petticoat. Together we tested 15 petticoats in total from popular makers. If you want to see how yours fares, go check out the video!

Would you like to know whether the Wunderwelt Original Petticoat made it to any of our Top 3 lists? Then make sure to check out my blog post specifically about that. You will find it by clicking the link here.

And if you were planning on buying the Wunderwelt Original Petticoat, it’s available on Wunderwelt Fleur here, now also available in a longer length here. (NB that we have tested the shorter one only.) Don’t forget that you can combine your order with your regular Wunderwelt order too – and it’s still Winter Sale time!

4 great things that 2020 gave to the j-fashion community